There's an organization called Trail Mix down here that looks for grants and private monies to fund trail building. They do a lot of planning in the winter and a lot of trail building in the summer using a mixture of volunteers and paid labor. They just held a series of townhall meetings to talk about the future of the Treadwell Ditch and what type of improvements they should think about making to the trail system. As expected there is a lot of controversy about multi-use and allowing motor vehicles or even bikes on trails.

One of their current projects it updating a trail around part of Auke Lake by the UAS campus. I just learned that Auke in Tlingit means little body of water so by saying Lake and Auke together is a little redundant, but I digress.

Here's one of the two new floating bridges that Trail Mix installed to go across some of the swampy areas of the lake. These are really nice - I hope when the lake freezes over they aren't damaged. I'm sure that Trail Mix did their research and have anticipated the climate. 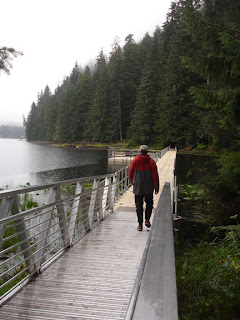 After our trip to Gustavus, Tim was pretty jealous that Susan had her own Mule. He was thinking about hijacking this little backhoe. 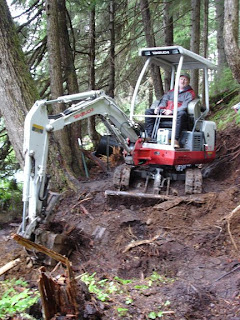 And this shows some of the work that goes into setting the trail. There were loads and loads of rock on top of fabric on semi-level ground. As we walked along the trail to the end we saw mini dump trucks and rollers on small tracks to help with the project. 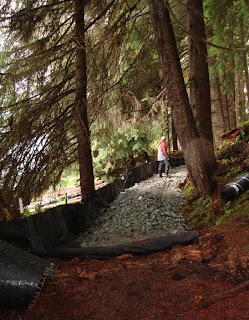