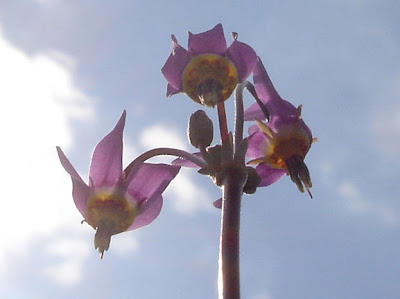 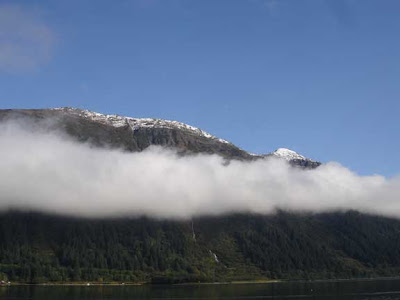 Rising moon down the Gastineau Channel by Sandy Beach… 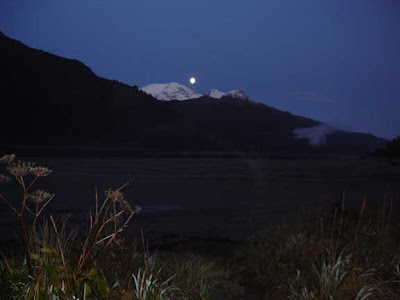 I can tell that winter is coming because the mallards are spending more time in front of the house. At the height of summer they disappear and then this time of year they start to gather again and hang out day and night.

Posted by Heidi Olson at 7:11 PM No comments:

This trail follows part of the Treadwell Ditch that runs from Eagle Crest to Treadwell. Most of the ditch is covered with rotting wood slats but some of that has rotten away leaving a trough of water. If it was cleaned up it might make for quite a "tube-ride" but it doesn't really get warm enough for that here. 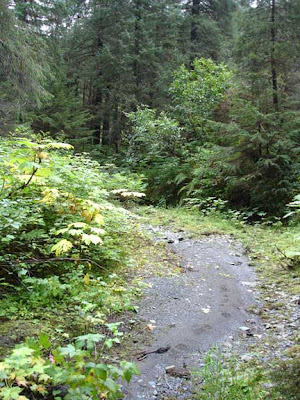 We walked this trail soon after helping Trail Mix out on a trail out at Pearl Harbor so we were enture to the process. There is a bridge that they built using local trees. 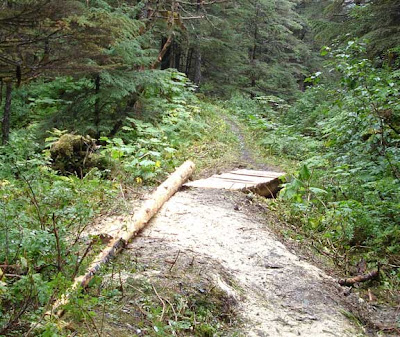 The planking was a little uneven but it was rough-up so it shouldn't been too slick after it wears down and gets water logged. 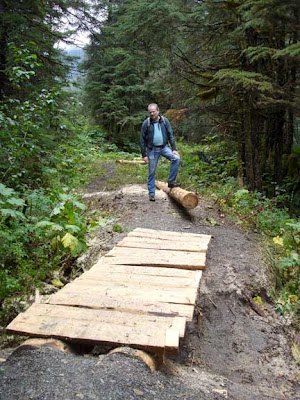 Looks like they were skinning this tree to use as a bridge over a deep and wet gully. It was a very large tree. Notice anything in this picture that is missing? 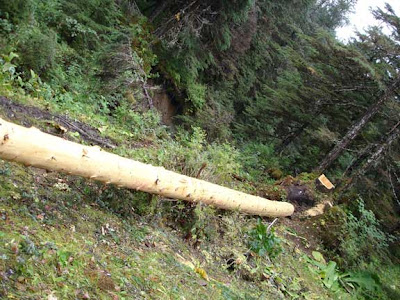 There is no bark on the ground. We looked all over and could find where they had pull the strips bark from the tree. We didn't see any evidence of a campfire if they burned them. I can't image that they would haul them out and it didn't look like they had raked the ground up. Its a mystery!

Once you get up high you run into alpine meandows and lots of little ponds. Doesn't this look like a great spot to see a Moose? I always look but never see one. 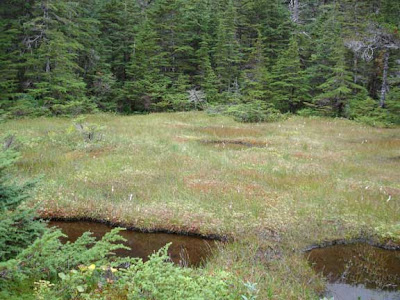 And at the end (at least for us) Upper Lawson Creek: 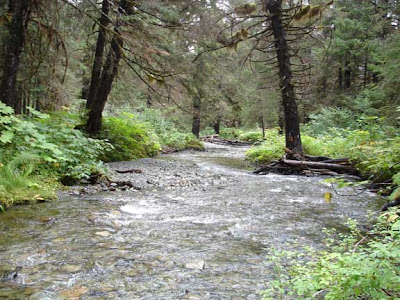 Posted by Heidi Olson at 7:20 PM No comments:

Did you hear that? 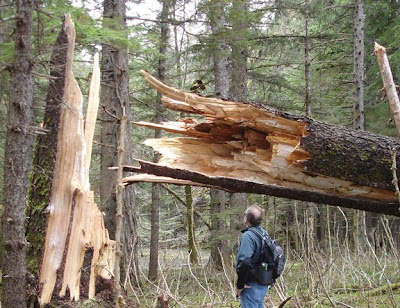 This was one big tree. You wonder what could be so forceful to take something like this down!
Posted by Heidi Olson at 7:13 PM No comments: 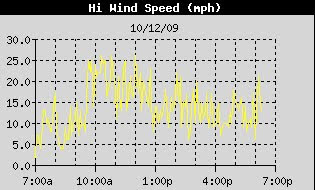 It was a beautiful night for a beach walk although we had huge gusts of winds today (up to 25) according to this graph but I'm sure that down here on the water it was much higher. 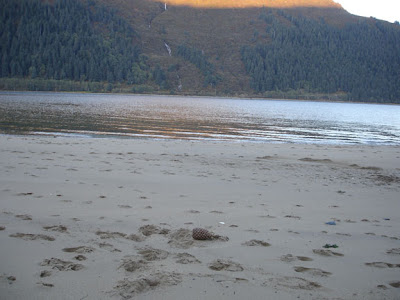 Yep - a pineapple? Do you think it floated all the way from the tropics? 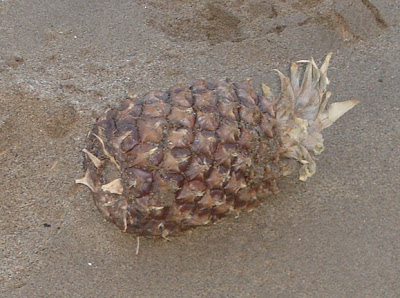 Posted by Heidi Olson at 7:35 PM No comments: 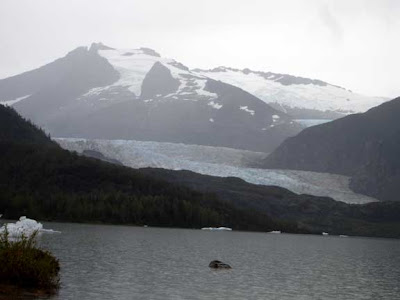 We had a nice walk on the West Glacier Trail. As we started out it started to rain but we were prepared for it. By the time we got done with the 5-mile hike it was pouring and we were very wet. Its always nice to get back to the nice, dry car and shed the sticky layers.

The first part of this trail would be a great little bike ride but it quickly starts uphill with switch backs and some boulder climbing. We have seen bikers on the upper trail but I'm just not that good of a mountain biker to attempt it. 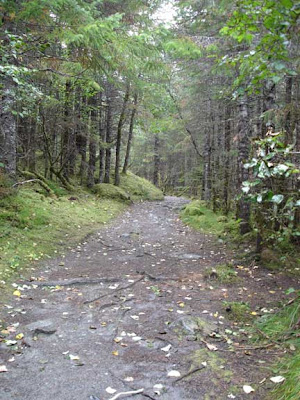 Of course when it is cloudy you the blue of the old ice really shows better. 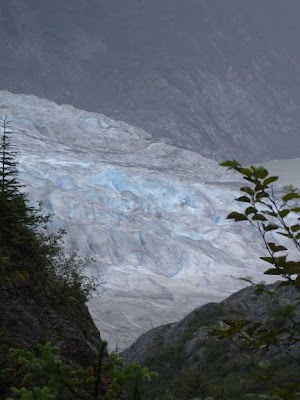 We haven't been up here for a couple of years but you can definitely seen the glacier mass decreasing in just that short time. 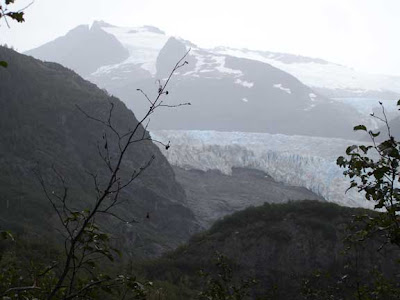 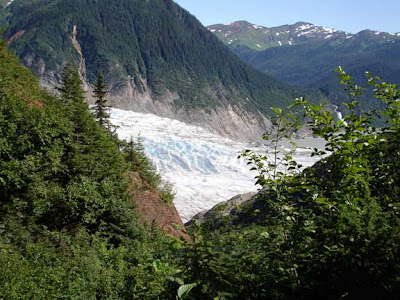 You definitely get a different view of the glacier from this side – here is Nugget Falls and the Visitor's Center from across the lake. 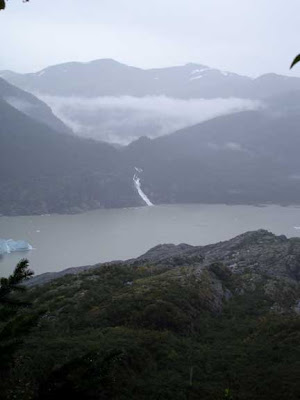 The trail – the rain had steadily gotten worse since we started out and the trail became a small creek bed! 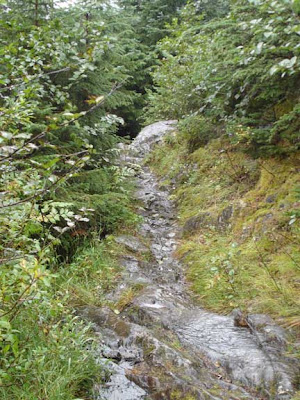 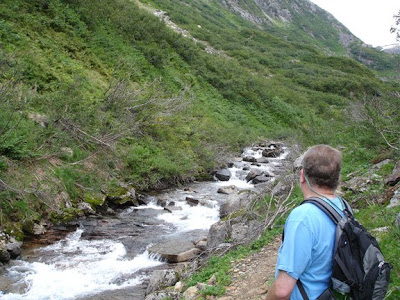 We made it to Granite Creek before the snow started flying - its been on our list ever since we made our first attempt a couple years ago but had to turn around due to snow cover over a steep ridge - and us without our ice picks (or whatever you call them).

It was a warm out and the clouds deceived us into wearing long pants. It was very windy along the first part of the trail around the "horn" on Perserverance Trail - at one point it was a bit much and you had to really lean into it! We got pelted with little stones from the cut bank.

But it was all worth it. There were so many people out and about on the trail - we didn't go more then a few minutes without passing some coming in or going out. Looking back towards the basin – I think this is Icy Gulch. 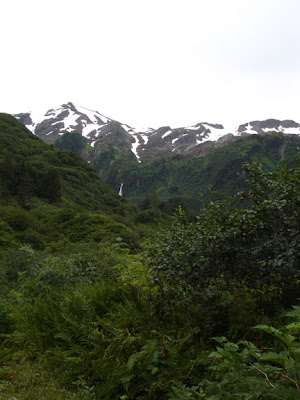 When we got to the turn-off for Granite Creek we met a group of people who said there was a large group of sheep on the ridge. We counted at least 25 – look at all the white streaks! 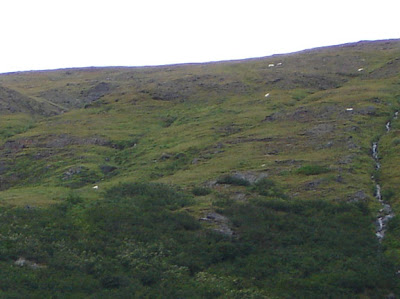 Posted by Heidi Olson at 7:11 PM No comments:

We had a beautiful weekend bird survey this month and celebrated our one-year anniversary of not finding any dead birds! YEAH! On this adventure, friends David and Kristy joined us on our quest.

In celebration, we decided to extend our stay on the beach and do a little casting. I would say fishing, but both Tim and David checked the regulations to see how many we could keep (6 each) and then I put an empty 40-gallon cooler in the back of the car. So we really only did some casting. 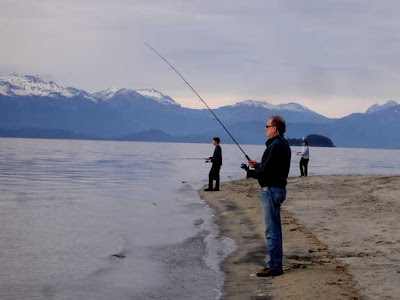 The wildlife viewing was really great though – we saw humbacks, harbor seals, a couple pods of killer whales, ducks, geese, ravens, eagles, and a ton of gulls. We even two a couple of fish follow the lures in but no bites. 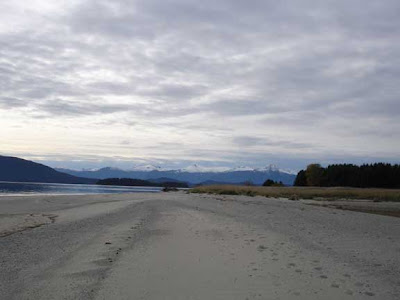 Cappy in the Fog 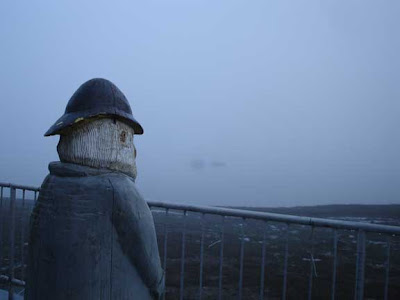 Fog this morning - it is supposed to get up to 50 and sunshine today. If you look hard enough towards the sky you can see some blue up there.

There aren't any cruiseships scheduled but there is some big ship coming up the channel. It has been blowing its fog horn for about 25 minutes. It may be a supply barge or something else. It doesnot sound small.

We've had a small fishing boat and skiff anchored out in front of this house since this weekend. It it interesting to watch it when the tide changes. First it is right in front of the living room picture window and then it is gone - floating towards town. It seems like it is sitting right in the middle of the channel but boats don't seem to be bothered.

Oct is supposed to be the rainy month and so far yesterday was pretty rainy but today looks like a lovely, cool, autumn day - can't wait for the weekend!
Posted by Heidi Olson at 8:55 AM No comments: