We sent a friend a birthday card last month that had this recipe for Roasted Pumpkin Tostadas and I've been waiting to try it out. I've never cooked with a pumpkin before and I wasn't sure if the pumpkins you would normally use for carving would be any good. I've read where you need to use a pie or sweet pumpkin but wasn't sure I'd find one here in town.

So I went ahead and got a small pumpkin and thought we should try it anyway. I carved a small portion of the pumpkin into the short strips like the recipe called for. 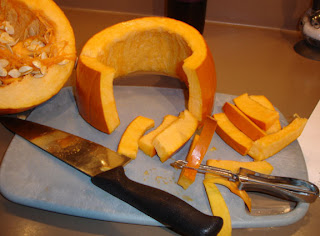 The pumpkin didn't get golden brown in the oven, like it suggested, but I was afraid to let it go any longer – I didn't want the pumpkin to be all mushy. Next time I will sprinkle the pumpkin with some chili powder before roasting.

I also didn't roast the red onion with the pumpkin because it didn't make sense that the onion and pumpkin would take the same amount of time in the oven to roast. I thought the onions would end up as burned threads. I decided to grill them in a frying pan.

We also decided not to fry the tortillas. We're trying to be a little healthier so Tim grilled the tortillas in a dry cast iron skillet until browned and then we put them on a pan, added the pumpkin and the onions and popped them in a 350° oven for maybe 15 minutes. We couldn't wait any longer and w/o the extra oil I doubted that they were get more crisp so we ate them as they were.

They ended up folding them over like you would a taco. The pumpkin isn't as sweet as yams or sweet potato and had a really nice flavor. They were really good with a dollop of sour cream on them! And there's leftovers!

I'd like to try pumpkin with a chipolte flavor. I think I'll have to try this out with the rest of the pumpkin. Happy Halloween! 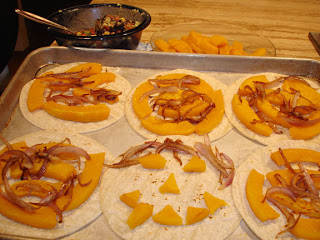 I did end up making the Pumpkin Chipotle Polenta recipe. I found out though, that neither one of us really like polenta that's runny like grits. I haven't made it before but I've had it in restaurants and at my niece's house a few times. It was always served more like a flatbread. So this recipe is more like grits. After we slurped our way through a serving, I got a baking pan out, greased it up and poured in the polenta. I baked it for about 30 minutes at 350° until it was browned on the top. After it cooled, I had a little taste and it was really good and much easier to digest! More like what I expected. Unfortunately, it went bad before we could actually get around to using it for a meal.