Despite the dreary-sounding weather report, the sun rose to display a pink sky and continued shinning all day long in a near cloudless sky. It was time once again for our monthly beach survey out at Boy Scout Beach. We packed a small snack and hit the trail a little earlier than normal. The 45-minute drive out to the trailhead gave us glimpses of blue sky and snow covered mountains. We weren't sure what the trail condition would be with the recent 4 feet of snow and then two days of rain. The twice a day shoveling I did while Tim was in Florida has reduced itself into patches of green grass and a few mounds of soft snow. I keep wondering if we shouldn't just ignore the snow when it falls as it always seems to melt a few days (or a week in this case) later.
We had our snowshoes but ended up only needing our microspikes. If you veered off the trail then you fell through the snow up to your (my) knee but it was a pretty wide pathway so wasn't too bad. There was only a few really icy spots but it was reassuring to have the microspikes.
When we finally made it to the beach the view was incredible and we slowing shed outer clothing as we got out of the forest and into the open. It was like a spring day. There was warmth from the sun and no wind. 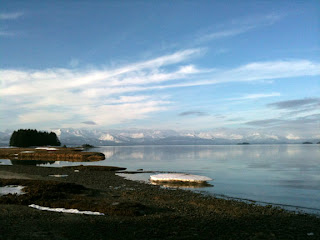 And then we found a deceased adult Bald Eagle near the high tide mark from the previous high tide (around midnight). The bird had all of its outer parts but was just a carcass of bones and features. We didn't need the identification book this time to know it was an eagle. 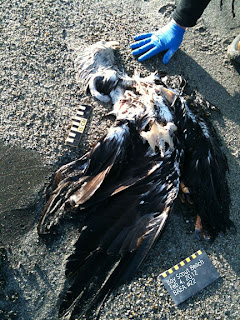 With wings measure 110 cm and a tarsus measuring 60 mm it was a very large bird, so probably a female although we can't confirm.
Bald guy with the bald eagle. 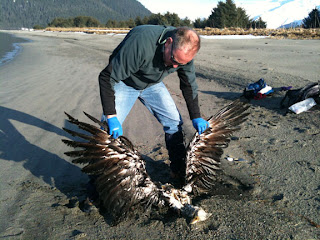 We taged the bird with our designated Orange band and since it was our second bird it got another orange tag double orange (in COASST speak). 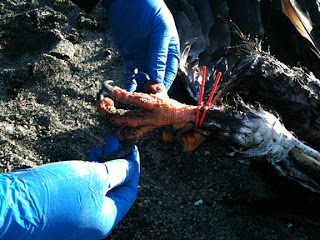 We remarked that if we had to find a deceased bird, that the weather conditions we had were the best for it. It would have been miserable if it had been pouring down rain or snow while we were taking measurements or trying to make notes on the data sheet.
Posted by Heidi Olson at 3:41 PM