Ever impressive Grand Canyon - even from the air, the beauty of the canyon's depths and color stratification is breathtaking. 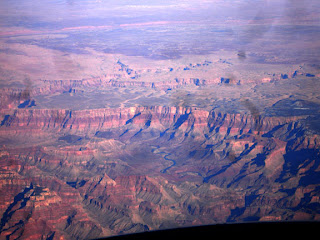 I didn't get much time in Phoenix to do very much but one does have to eat and there were some good choices for dining right around the hotel and conference center.

One place I wanted to go but never had the chance is a small placed like Matt's Big Breakfast at 801 N 1st St. When I first saw this small square block building it was Saturday morning on my way to the downtown market. The line went out the door, around the block and down the street. From what I gather, its not a place to go for a healthy breakfast but if you're in the mood for greasy hashbrowns, thick slices of bacon or waffles, then you might want to check it out.

Here's some placed I did make it to with good results:

SAM – interesting menu with Spanish And Mexican food. I went with a large group and was amazed at the service. Without even asking the waiter gave us separate checks, all correctly itemized; the dishes were delivered to exactly who placed the order and all special requests were fulfilled. The menu was really interesting with a wide variety of items. I think most of us had something southwesty. I had shrimp tacos which were served with a mexican coleslaw. This is the same place that serves the white chocolate pecan tamales!

My Big Fat Greek Restaurant – unless its made at home I don't get a chance for greek food very often. I had a combo meal with spanikopita, pastisito and roasted potatoes with a lemon sauce and a baklava cheesecake to take back to the hotel with me. I have to say I was really disappointed in the cheesecake. It wasn't very good and I didn't finish it. It was bland and had a doughy crust. The potatoes were really good and this recipe I found is similar. I made too much sauce for the amount of potatoes I made but it was very tasty. I will add more lemon juice next time and would probably slice the potatoes so there is more surface area touching the sauce when it marinates (maybe even steam them a little before marinating). I used little swedish taters.

One note - I was sitting near a little girl about 4 who had a dvd player set up by her Dad so that she could watch movies while he talked to an older couple (maybe the grandparents). That was a first for me. It seemed to be that she was old enough to participate in conversation and start learning how to eat in a public setting. In fact the older lady kept trying to engage the little girl in conversation. But then, I don't have kids so what do I know.

Probably the best spot for dinner was a little doorway where you got a big slice of pizza, a green salad, and a big glass of wine (from a bottle) for $7.50!
Posted by Heidi Olson at 5:08 PM