I noticed a small blurb in the newspaper's Around Town events that there was to be a totem raising at the new high school on Friday afternoon. I haven't been to such an event so I thought it would be interesting to attend. I assume it would be outside and since it was during the school day, the program wouldn't be too long since it had to fit within the school schedule.

I set off dressed warming for the outdoor adventure, camera charged, and ready to go.

Well, I was wrong. I was wrong on many of my assumptions. The totem was already raised and in place so it was like an unveiling. And it wasn't outside, but rather in the main entryway of the new school. And although it was supposed to fit within the school schedule the intention was to take the entire afternoon for the festivities. One of the master of ceremonies apologized to the elders at the beginning of the dedication, that they would have to push things along and keep things moving to keep it as close to 2 hours as possible. I thought, well, ok. I could do that.

I don't know that much about Tlinglit culture and the two master of ceremonies were very good at explaining what was happening and why, as the events and their significance related to the traditions. And as each person involved got up to speak, their own take on what was going on came into play. Most of the short speeches were spoken first in Tlingit and then in English. And there was a lot of Gunalcheesh's (thank you) being traded back and forth.

The carver is from Haines and he brought with him his dance group to deliver the gift. I have noticed at other gatherings that making a dramatic entrance and exit are all a part of the activity, something I don't remember as being as significant at athabaskan gatherings.

After the totem was unveiled, its traditional for the carver to perform a dance to signify his release of the totem and giving it to the recipient. You can kinda see the guy with a hat and white shirt holding up a couple of carving axes (I'm sure they have another name). I couldn't really see his steps but he danced around the pole and the others sang a song that he had written, called The Mandarin Song. He said that he had come up with the design and worked on this pole for a year so you can understand the emotional attachment he must have felt when giving it up. 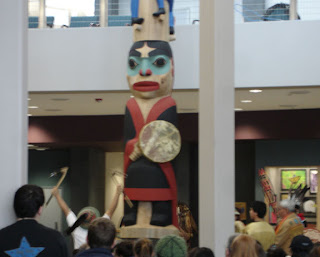 The bottom figure of the totem pole is a Tlingit woman. She wears a traditional button robe. She represents our grandmothers, mothers and aunties, and the strong nurturing forces that guide us in growing up as we develop our individual potentials. The drum she plays represents her knowledge and experience. 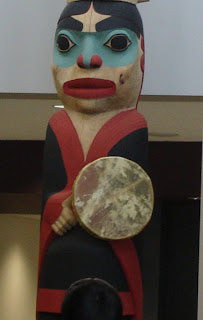 She teaches and encourages youth to climb the tree of life, and reach for their future ideals. They hear her encouraging drum beats and begin to climb the 25-foot tall red cedar totem pole.

I thought it was interesting when the carver introduced one of the younger boys from his dance group. Apparently the carver had the boy lay down on the tree, hugging it and then traced his outline on the tree. His sister is on the other side. How cool is that! The boy said a few words about being a part of the process and hoped that the kids at the high school liked it. 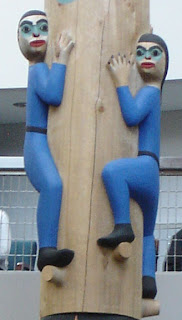 The glass faces represent the youth of the generations to come, the children of the future.

So this is probably one of the first electrified totem poles. The faces are made of glass and they light up. The carver mentioned two children who helped make the molds for the faces. That must have been an interesting process. 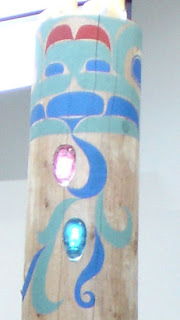 The top of the totem pole is the Falcon, mascot of Thunder Mountain High School.

I couldn't get the top part of the totem and after 2-hours, I had to leave the party before it was over so I couldn't sneak up and get a close look. Look at the Juneau Empire Story for more close up pictures. You can actually see me in the group photo - can you pick me out? 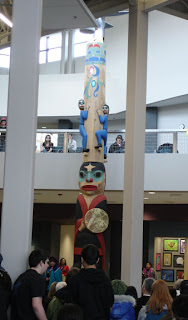 It's really beautiful. I hate to think it will weather like all of the other totems I've seen outside..