So who would have thought that the real celebration for the 4th of July is actually on the 3rd! It all started about 6 pm when people started to gather along the beaches getting their bonfires set up. The big fireworks display was scheduled for 11:59 pm. Whoever sponsored it (probably the City and Borough of Juneau or CBJ) set it up on a barge that they moved in after the cruise ships left town. There were at least 5 big ships in today. They normally leave town around 10 but tonight they all started heading out of town around 7. Not sure why, you'd think they would want to stay around for the show! 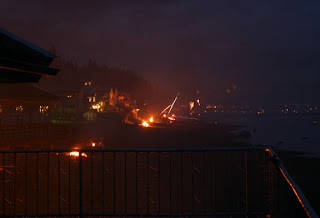 Here you see Cappy and the beach fires that were set off along the beach on the Douglas Island side. We had groups on either side of us providing quite a show of extensive "wow" power. I don't know what the explosives are all called but these folks didn't just have sparklers. I did find a couple of lighters in our GD drawer so we flicked those a few times.

At about 11:30 there was a 10-15 minutes display of high flying sparks from someone down the beach from us. It was something. And then almost exactly at 11:59 the real show began. It was quite impressive - but then I'm easily pleased if I can be outside watching a fireworks show and not have to be wearing my bunny boots and face mask. Ok, it was starting to sprinkle so I did have a baseball cap and my anorak on. But I wasn't wearing wool socks and long underwear!

There are two parade tomorrow and a whole slew of events taking place down at Sandy beach so I'm sure we'll be adding more as the holiday progresses!


We must be free not because we claim freedom, but because we practice it. ~William Faulkner
Posted by Heidi Olson at 1:25 AM