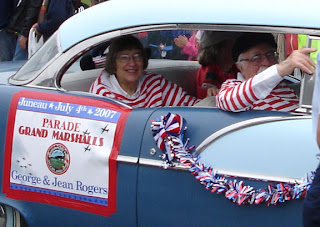 Crazy community Marching Band complete with 80-year old drum majorette in the front and a batton twirler in the back. They weren't too bad and looked like they were having fun all dressed up in crazy outfits! 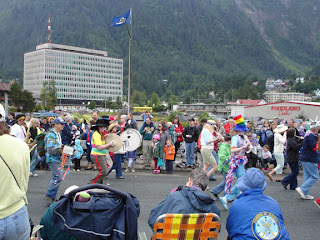 I'm not sure but this group should have taken first for Marching Unit. It was a group of 20-somethings all working on the Juneau Icefield Project in their crazy mountaineering gear all tethered together with climbing rope. They had three or four different cadences - The only one I can remember was the surging glacier where they all crept ahead at an excellerated rate. 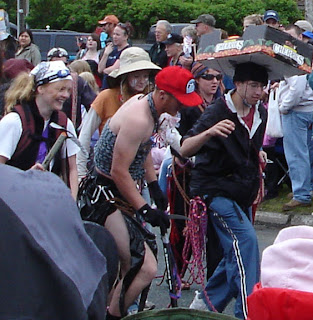 This truck had a traveling player-pipeorgan in the back 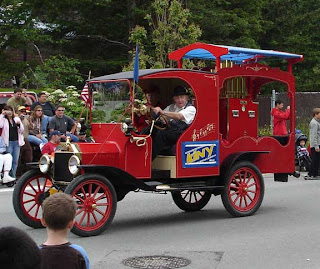 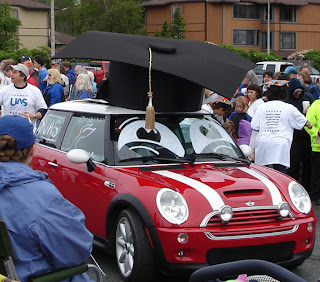 This group of Tlingit's took second place for "most Alaskan" 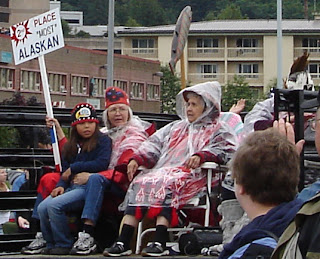 I think the coolest thing about the Juneau parade is that it goes up once side of Eagan drive and than back down the other side – so you get to see it twice!

Douglas parade: As you could expect it was a little more informal - lots of kids and decorated bikes. Also saw a lot of the same "floats" and groups marching from earlier in the day. We also saw the Soapbox Derby cars that were racing later in the day go by all decorated up being pushed or pulled along by an adult. Also a Tlingit group that I expect was the same that was on the performance schedule that was slanted for later in the day at the park. 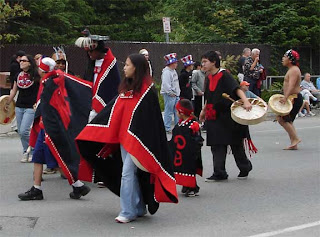 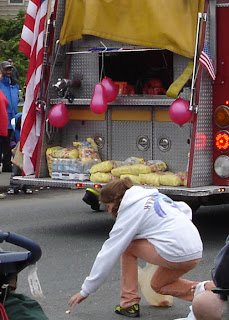 As we approached the parade route first thing this morning over in Juneau I saw kids with plastic grocery bags and my first thought was, "How cool that they will be picking up garbage along the route. What a great place to live where even the kids are consciences of the earth." Well in a way they did pick up garbage, the kind filled with sugar and other things you can"t pronounce or spell! 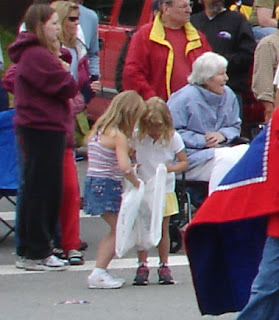 One big difference from the only other parade I've been to (Golden Days) is that this was a parade with the Theme of "Freedom is not Free" to celebrate Independence Day. So there were a few political entries - not like hopeful-politicians handing out bumper stickers - but groups of people with something to say: the kid Joe from the Bong hits was handing out the bill of rights for free speech, recycling - keep our oceans plastic free, and veterans for peace to name a few. I must admit that I think North Pole has a July 4th parade and have never been to it. But somehow I can't believe that NP would have any similar-type entries. 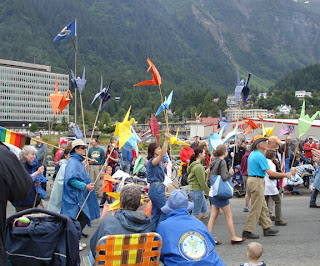 Another obvious difference was the presence of uncle sam hats rather than cowboy hats and boas!

More pictures on flickr - use juneauparade (all one word) as tag to search
Posted by Heidi Olson at 8:14 AM