There was an entire list of activities taking place for the 4th of July celebration at Sandy Beach - very convenient for us to have this happening a couple blocks from the house. The streets were a mess with cars everywhere. Parking is already a problem for people who live here so if you add the extra visitors it gets congested. Grayline had a free shuttle which was widely used.

Just so you know that a previous post I made when first coming here wasn't just me seeing things - our famous Douglas mascot was in the parade. I'm talking about the guy on the right side. 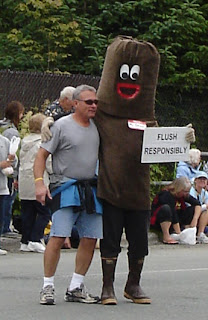 We ended up spending a lot of time at the dog agility trials - more trials than triumph for most of those dogs entered. There was also a sand castle building contest - not sure the contest organizers were in tune to the tide though because right after the judging the tide came in and washed some of them away. This entry was probably the best - it was too big to get a good shot of. I tried holding the camera up and only got more shaky photos. I also liked one of the entries that was a sand obstacle-croquet course. It looked very intricate and like it might be a hard course to run through. 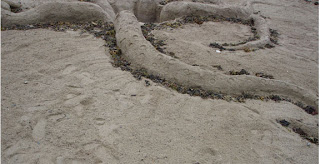 There were foot races, pony rides, food booths, the finals for the soapbox derby, a steamboat race (only one entry - the infamous Laurie Ellen) and a stage with music and dancing.

It started raining about 2 but it didn't seem to stop too many people. We finally walked home about 4 realizing that we had been on our feet since 10:15 when we left the house on bikes to the first parade.

This pretty much sums up what most people's attitudes are like around here: 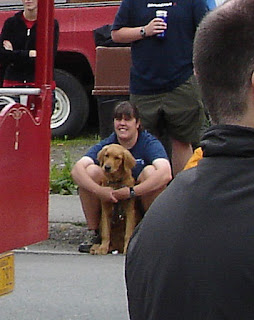