I've been talking with some of you about the berry picking opportunities down here and we finally had an opportunity to explore a little deeper and also do some quality control.

On our last walk at Auke Rec Beach (map - look for Auke Rec) we walked the entire beach from Pt. Louisa (fishing spot) to the end by Indian Cove. I noticed these huge plants that had raspberry-like leaves and some bright red seedy fruit. There was a nice long row of them along the beach edge. Upon further inspection I thought they were some type of raspberry except the fruit wasn't shaped quite right – they were more round than conical. They looked like little caps. They were sweet with little seeds - seeds much smaller than raspberries. 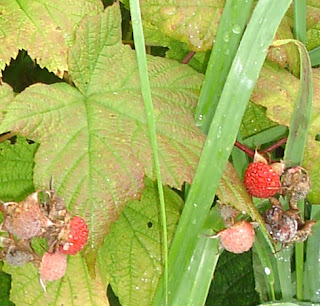 I didn't even bother to look them up when we got home–I had already decided to return the next day and pick some. What a pleasure to pick berries at the beach listening to the surf come in. This was a new experience for me. I did realize that the bushes and grasses where pretty tall and I was the only one at the rec area which is a little unusual - we almost always see someone else there. After I saw the bear scat I started singing or whistling depending on what popped into my mind. Tim had just told me a story about Vern and Jerry singing show tunes while waiting on a street corner in Ketchikan so show tunes became the theme for this pick.

It was misting out so my berries got washed as I picked them. I forgot my berry bucket but I was so optimistic I had brought a back-up container with locking lid and only managed to drop this container once. I picked the berries up off the ground and ate most of them. 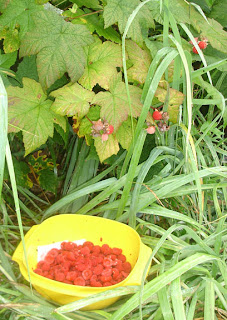 So if you haven't already guessed – these are Thimbleberries. The leaves are about as big as my hand, there are very few thorns or stickers, and the berries are about the size of a quarter or maybe a little smaller. I made some freezer jam. For some reason I picked up a different kind of pectin than I normally use - this was Ball brand instead of Surejell. I decided I don't like the ball brand - it made little gelatin boogers in my jam - I tried to get them out but I was afraid I was stirring the jam too much. I had expected to give some of this batch of jam to some friends but I guess I'll just have to keep it all - can't give boogers to anyone I know down here! In Fairbanks, well that might be a different story!

On Saturday we met with the Juneau Audubon for a Bird and Berry Hike up at Eagle Crest - the city owned Ski area (map - look for Eagle Crest). I have to admit - I bet Tim and I were the only ones there who had binoculars! It was mostly a berry picking walk. The two guides had a very nice display of what the local berries and their leaves looked like so that was nice to see. There's really only one berry around that's poisonous and that's baneberry. Two other berries look like it: Dogwood and Elderberry but unless you're making wine out of the elderberries, you probably won't pick either one of these others anyway so no worries!

Tim scouted out a nice patch of blubs and made some friends while he was at it! 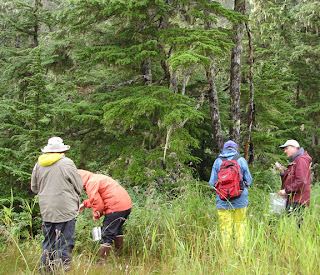 We picked for a couple of hours while looking for various varieties of berries. Found some salmonberry, raspberry, several different kinds of currents, huckleberry and at least two varieties of blueberries. We didn't find enough of anything but the blubs to keep separate. Ended up with about 8 cups of blueberries after walking and talking. 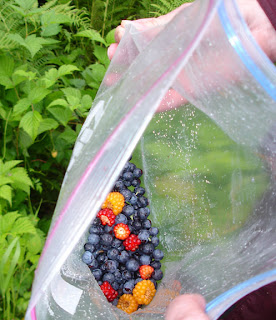 I must say that I've been giving the blueberries a bad rap until this weekend. I thought I was seeing a lot of blueberries along the trails on our different hikes and I wasn't impressed. The berries tasted tart and had lots of little seeds inside - almost mealy tasting if you know what that means. As it turns out these aren't blueberries – these are huckleberries. And its really hard to tell them apart unless they are growing next to each other. 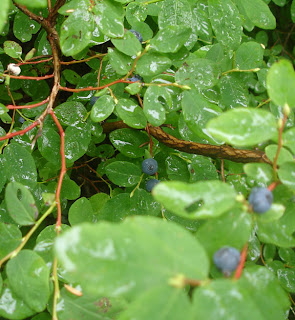 We were really careful while picking berries because we've heard so many stories about the berries being wormy. If they felt at all soft we dropped them. When we got them home I started sorting through them, then I got a couple of big pots and soaked them for hours, and then sorted through them again, and still found a few worms. So what's a little extra protein in your coffee cake. I won't be eating any raw (blueberries, that is) unless I soak them in tequila!
Posted by Heidi Olson at 10:18 AM