Windfall Cabin at the Windfall Lake

This is the Herbert Glacier as seen from the Boy Scout trail at Eagle Beach. This glacier feeds the Herbert River which flows into the Eagle River. Along with the Mendenhall and Eagle Glaciers, this is one more glacier that you can hike to. 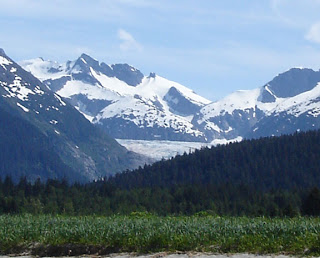 We've been making our way through the 90 short hikes around Juneau. One of the places that we really wanted to explore what Windfall Lake (map - look for Windfall Lake Spot) and the trail to a NFS cabin you can rent out. We'd seen pictures on the web and thought it sounded like a great place to walk into; maybe do some fishing, canoeing, and relaxing in the cabin for an overnight or two.

We thought we'd start with a day hike to see what the trail was like before getting our backpacks all loaded up. The first mile or so was very well maintained - a wide, well packed trail with some boardwalk. Our first thought was, forget the walking and get out the bikes! The trail crosses the Herbert river a couple of times and there are well established bridges that take you over the rushing water. The river is a smaller version of the Nenana River inside the park at the canyon - glacial fed with a few riffles in it.

Once we got past the bridges the trail became narrower and more board walk was added then the boardwalk disappeared and there were more tree roots and steps. It became clear that although riding your bike might be fun, it would not be that much fun if it was loaded down with your overnight gear. If you didn't unload to get over some rough spots your packs would fall off!

Then when we came to the balance beam we decided we had made the right choice to travel by foot. 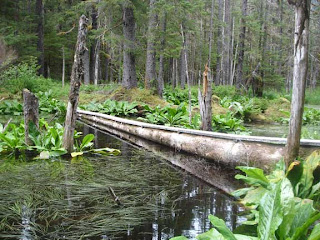 We found that the trail was a little shorter than we expected and it was a nice surprise to see we were getting close as we began making our way up the hill to the crest of the hill. We have found that a lot of trails around here are very well maintained and there's a lot of boardwalks, bridges, and stairs built along many of them. Its much different from the Interior where most of the trails are multi-use and the motor vehicles end up by doing damage to them. 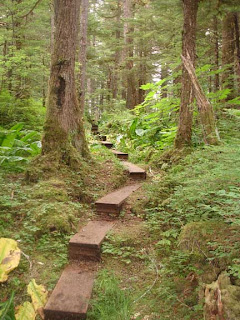 Here's the cabin at the crest of the hill. It had a breathtaking view. 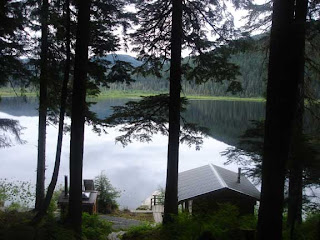 The view from the deck. The canoe looked pretty beat up but there wasn't any water in the bottom so it must not leak too much. There was only one life jacket at the cabin or I might have talked Tim into taking it for a spin around the lake. 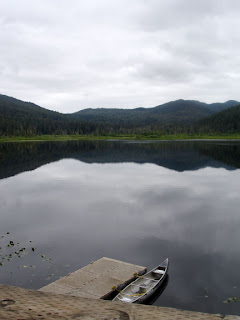 And the front of the cabin from the dock. Since no one was here we had our lunch on the deck at the picnic table. 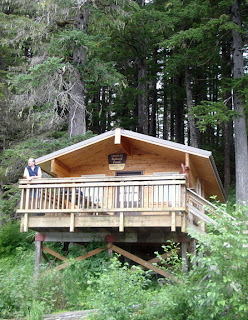 We weren't alone though - there was some beautiful orange fungus amongus. 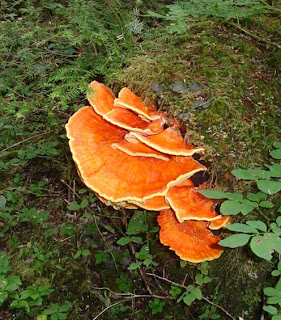