Just kidding - we weren't with the Petersons but we met them along the trail! Peterson Lake (map - look for Peterson Lake) was our final destination where there's a forest service cabin that you can rent out. We had thought about coming here with the Holmbergs when they were in town but the dates just didn't work out. We saw a few birds: Winter Wrens, Northern Thrush, Swainson's Thrush, and heard the ravens.

There wasn't much elevation gain which was nice and the trail ran through the woods sort of along the creek - at least you could hear the creek rushing. At about 1 mile in we found a spot where you could look down and see the Peterson Falls. We thought this might be a good fishing spot if you could get down the cliff – might have to follow the creek from the road instead of taking the trail. We've heard that there are various salmon, trout, and dolly's in the creek and up at the lake. I would image that the 1 mi falls would stop any salmon from going up farther. At about the 2 mi mark the trail opened up into a series of meadows. This was nice because most of the trail was made up of boardwalk and in the trees the boards were very slippery. In the meadow since it was more open the boards were drying and felt much safer. 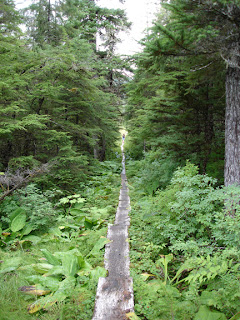 This was one of the straight stretches – you can see Tim way up there – reminded me of the highway between Delta and Donley Dome – very straight run! We found some moss berries and 2 lowbush cranberries which weren't ripe yet. Didn't see alot of other berries though.

At about the 3 mi mark we came across another smaller falls and stopped for a little break. At this point the creek was much closer and there were several spots that would have made for a nice picnic stop with big boulders to sit on. And at about 4 mi you get to the lake – it was much bigger than I expected. Plenty of room for a float plane if you were so inclined. The cabin was on the opposite side and about another 1/2 mi of boardwalk took you around the lake to the small cabin. There was also a dock and a row boat you could use. We had our lunch sitting on the dock because there was another group at the cabin. This picture is from the dock looking back to the headwaters of Peterson Creek. 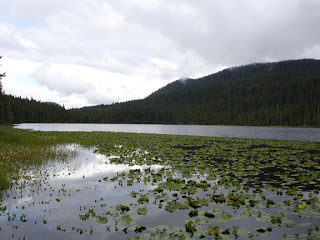 The way back was mostly downhill and this is were the slippery boardwalk began to be a challenge - we both slipped numerous times and I actually fell three times – the last one the most painful and being 20 yards from the car. Good thing I have some soft pillows.
Posted by Heidi Olson at 9:01 PM