If you've been here recently you have to admit that there are a lot of beautiful flowers in people's gardens. Some of the landscaping is really breathtaking. You do see a few vegetable gardens around too but rarely do you see a greenhouse. There is a community garden area and they were celebrating their fall harvest this last weekend. Our friend J has a sister, Pat, who lives down here and invited us to check out the festivities.

I was really looking forward to the farmer's market part and was hoping for some vine ripened tomatoes. We didn't get to the fair until near the end of the day so there wasn't much left - a zucchini and some herbs…that's about it. We did look at some displays and they had a little veggie competition going and were about to announce the winners. We saw few carrots, broccoli, and some unripe kiwi (which if there wasn't a sign up I would have thought they were small (1 1/2 inch green peppers)) but mostly there were herbs.

I guess that makes sense – this is kind of a herby place. Anyway we didn't get any veggies but it looked like everyone was having fun. They had some games for kids including the potato throw shown below. The little boy (maybe 3) keep moving around and I didn't get a good picture of him throwing the "potato" at the board. As you can see - he needs a little practice! 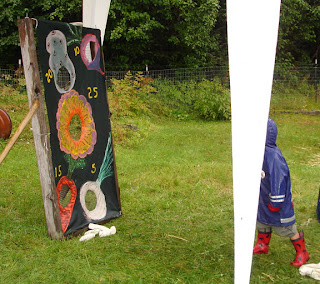 In closing, I think one of the highlights for this event actually took place a few days before it happened. After a radio interview on the public radio station the host played the Vegetable Song! No really - we heard it on the radio!!! If you're not familiar with this masterpiece then here's the some of the words:

It was late one nite by the pale moonlight
all the vegetables gave a spree;
they put out a sign that said the dancing's at nine
and all the admission was free,
there was peas and greens and cabbage and beans
it was the biggest crowd you ever did see;
and when ol' man cucumber struck up that number
you should have heard those vegetables screams
Oh little turnip top was doin' the backwards flop

and if you want to hear the tune you'll have to contact me and I'll sign it for you!
Posted by Heidi Olson at 7:09 PM

OK, I've had just about all I can stand of how wonderful Juneau is. It's beautiful and sunny and all the people are wonderful... we're starting to suspect you don't like us up here in Fairbanks any more.

I sentence you to posting about the dark side. Explore the seamy underbelly of rain town. Expose the mold and mildew ;)

It can't be all good with all those politicians!

…that would mean I'd have to venture downtown and there's no place to park. If I rode my new bike it would get all rusty from the rain and/or humidity. Depending on where I parked my bike I might have to give up a buck or two to a homeless guy who tells a story about a bear ripping the door off of his tent. He probably makes more money by telling that story than I do.

And didn't you read the part about not finding any vine ripened tomatoes? What perfect place in Alaska can't you get a decent tomato in the summer? You can even get nice tomatoes in Anchorage. I didn't have the courage to talk about the lack of carrots...it was just to depressing.

That's better-- and don't think I didn't notice inclusion of the smell of dead fish back a few posts ago... that's the stuff!

and seedy – only one word: huckleberry - ewwww!