During the summer months, the Alaska Marine Highway changes its schedule so that the M/V Fairfeather runs three times a week to Sitka. With the Labor day holiday giving us that extra day we were able to take advantage of the schedule so we decided to take off for the weekend. During the summer the Fairweather makes alternating trips between Haines and Skagway and Sitka. I think in the winter they only go to Sitka one day a week and the rest of the routes are to Haines and Skagway. The highspeed cataraman cuts hours off the schedule making it a quick 4-5 hour run instead of 8-9 hours. That's a big difference when you don't have a lot of time off.

We enjoyed a relatively nice trip over - a few clouds here and there and some rainfall. It was pretty warm through so we did enjoy time out on the deck. Going through the Sitka Narrows was beautiful - lots of small rocky islands some covered with Sitka spruce and Hemlock. 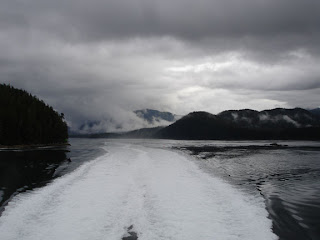 Probably the highlight of the trip was when they called for volunteers to help with a Man-Overboard drill. Boy is that water cold! They actually threw a dummy (no really) overboard and lowered a lifeboat for body recovery. I don't think they expected to actually pick up a person alive because it took about 45 minutes to slow down, turn the boat around, lower the lifeboat, and find the drowning person. It would be very unlikely that the person overboard would have a life jacket. Its nice to know that they do the drill. This exercise added about an hour to our trip but was something that doesn't happen everyday! 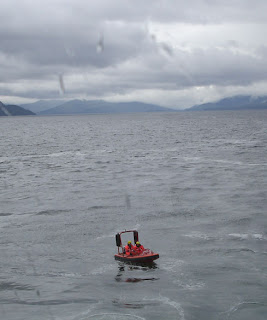