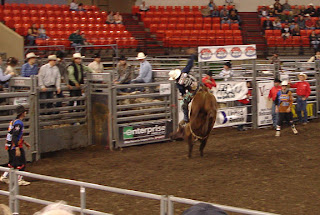 The PBR came back to Anchorage for the 2nd Annual Last Frontier Challenge this last weekend. It was definitely a different event from last year - no big opening production with fireworks and drama, no entertainment between go-rounds, quite a few Alaska bull riders, and very few of the big-time names. There was very little advertising done and no write-ups in the paper. Roxi said she heard advertising on the country radio station. The stands were not full so not sure who dropped the ball on that one.

Rune had fun getting signatures on a t-shirt his papa bought for him - he got 15 signatures and a lot of nice comments from the cowboys. Heidi volunteered to take him down to the arena to meet them - so everyone was happy! 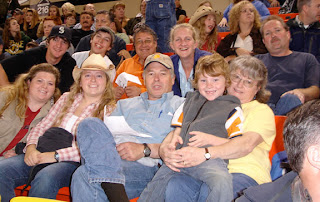 I'm pretty sure that the bulls won this event - there weren't even enough qualifying cowboys to fill out the 12 slot short go-round. There were also an awful lot of re-rides meaning the bull didn't perform well enough to give the rider a fair ride. This usually means the bull falls or lays down. Several of them just stopped when they heard the buzzer - maybe a little too well trained. They say its dangerous for the rider to get off when the bull is just standing there because you're never quite sure if the bulls are just going to let you get off peacefully or if they'll turn on you. There were a couple of guys who caught their spurs in the rope and actually pulled off their boots. Guess that's why your mama always said to put on clean socks. Thankfully no one got hurt.
Posted by Heidi Olson at 5:41 PM