We decided to go through the Kolob Canyons before heading farther south into Zion National Park. I'm really glad we did because it was really beautiful. There was a hint of snow on the ground and a few patches of ice but it wasn't nearly as bad as we thought it might be. The road was a beautiful red color - they must have used the local stone in their paving process. 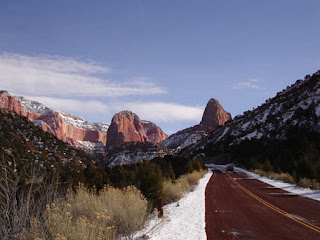 Beatty Point at Kolob Canyons - the view from the end of the road. We took a short hike to Timber Creek Lookout. Ended up following a park ranger's trail due to a covering of snow. Luckily it stuck pretty close to where the actual trail was and didn't veer off too much. When we ran into him on his return he did say that he had been looking for mountain lion tracks but didn't see any. 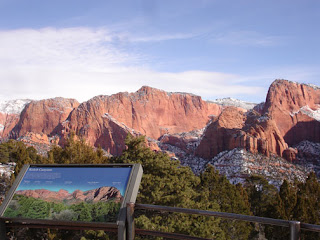 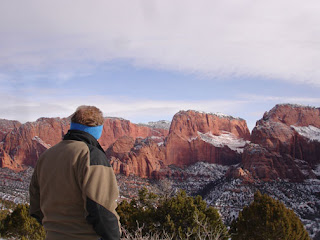 Zion NP was about a 40 mile drive through more sandstone cliffs and mesa's along the Virgin River (which eventually flows into Lake Mead). Springdale is the community right outside the park entrance and looked like a place that would be a real mess in the summer - lots of traffic stopping at gift shops - a lot like the Denali Park Canyon. We had thought about staying in one of the hotels in Springdale and even thought about the lodge right in the park. But we ended up getting done earlier than we thought and ended up driving to St. George. 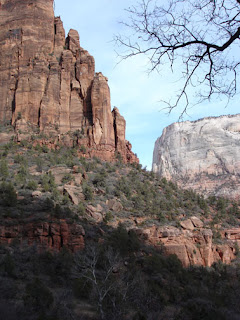 Riverside Walk was a 2-mile paved walkway along the headwaters of the Virgin River. Its at the very end of the road in Zion Canyon. I understand that if you wanted to you could cross the river and walk farther up the canyon. That might be fun on another trip. Nice little walk with a lot of people on it. 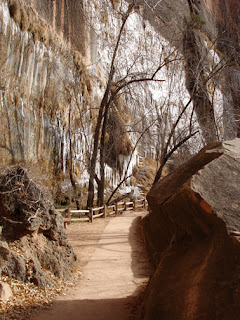 This was taken at the trailhead for the Emerald Pools trail. After a short walk on the red paved pathway we can to a barricade due to icy conditions. A waterfall had frozen in the recent cold snap causing a log of icy to form. So an attempt at a 1.5 mile loop walk turned into a .5 mile jaunt. 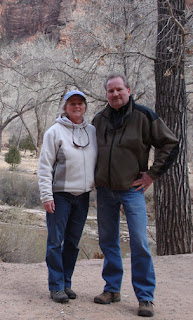 The best trail was the last one we found and really too late in the day for us to really enjoy it. Sand Beach Trail looked like a loop trail and I didn't find anything written up on it except for a dotted line on the map. It is one of the only trails that was actually wasn't paved. The trailhead wasn't very well marked and we found it along a narrow dirt path. The trail followed a creek and then crossed it and followed what looked more like a game trail up the middle of a canyon with tall sandstone cliffs rising above us. It was beautiful. It looked like the trail continued on into a box canyon. We kept an eye open for mountain lions, hostile indians, and bandits but didn't see any of them. We did come across a couple of mule deer camouflaged in the brush - I think we walked right past them once and saw them on our return trip. We also came across a flock of wild turkeys. 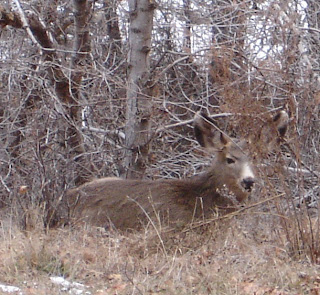 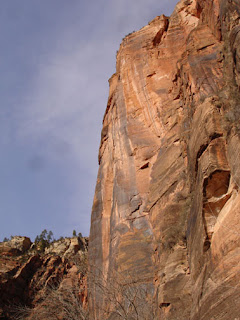