I didn't quite get out in time to get the snow starting to ripple down the avalanche shute but I did snap a couple of shots while the snow was in progress of whooshing down the mountain. It was a pretty gray day - with occasional snow flurries so you really couldn't see the top of the mountain. About 10:30 they had the road to Thane closed and then they started shooting the Howlitzer canons from across the channel by Sandy Beach. The shots shook the house - it would definitely wake you up. After about 15-18 shots the snow started to slide. 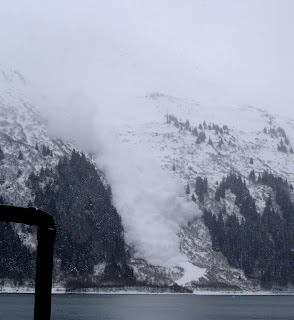 It finally ended with a big explosion of snow and all the ducks and gulls flying over to this side where it was safer! 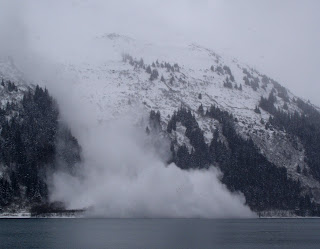 Not as dramatic as it was last year when we had the 200 inches of snow but it was still a pretty good show.
Posted by Heidi Olson at 5:57 PM