"Almost enough to move back to Fairbanks" 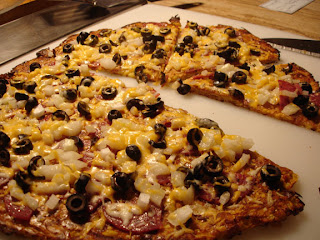 That's what Tim said when he tasted the squash pizza crust we made last night. All those giant zucchini we used to watch our neighbor Beven throw in the woods when we lived on the river and all those times our "friends" tried to give us a huge zucchini - bring it on!

I adapted the recipe from this site with the following changes. Make sure you wrash your squrash.

4 c finely shredded zucchini or yellow summer squash (I used a yellow and a large pattypan)
¾ c flour (don't know why you couldn't use another type of flour to go gluten free)
¾ c grated Parmesan cheese (didn't have any of this so I used 1/4 c shredded cheddar)
½ c shredded mozzarella cheese (used about 3/4 c of motz)
2 eggs, beaten
½ tsp ground black pepper
Salt to taste
I added garlic powder, Italian seasoning, dried basil, and onion powder - maybe 1/2 t of each

Once zucchini or summer squash has been shredded (recommended—food processor) lightly salt the squash and transfer it to a strainer. Let stand 15-30 minutes and press all remaining liquid out of the squash. I shredded it was a grater and put in in the strainer that goes with my lettuce spinner to drain - then before using I gave it a couple of good spins - this worked great!

Spread the mixture into a greased and floured jellyroll pan. Bake for 25 minutes. I used our pizza pan which has small holes in the bottom to help brown the crust. I sprayed the bottom of the pan and moulded the squash batter onto the pan.

Remove the crust from the oven and change the oven’s temperature to broil. Brush the top of the crust with oil, and then broil the crust for 3-5 minutes until the top is lightly browned. I upped the temperature to 400 instead of broil and gave the top a spray of oil. After it was brown I loosened it from the pan and turned it over. I gave the new top a spray of oil and baked it for another 5 minutes or so.

Allow the crust to cool slightly and slide spatula underneath all edges and under the middle. Place a large baking sheet over the top of the crust and gently flip the crust over so that the crust is now facing upwards. Because it can be difficult to flip the crust smoothly, it may be necessary to cut the crust in half to facilitate the flipping of the crust.

Brush the top of the crust with oil and broil for another 3-5 minutes until the top is browned. Cover with toppings as desired.

We chose not to add a lot of toppings in case it made the pizza soggy We topped it was a little salami, chopped onions, sliced olives and a small amount of mixed shredded cheese. Fresh tomatoes after it was baked added a nice touch. We decided that it would hold up under a modest amount of tomato sauce and would be very tasty with fresh basil and artichoke hearts. 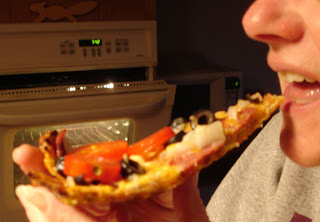 I will try this immediately!

it look really good too!

Heidi,
I actually make something from the same ingredients in the crust - zucchini pancakes. grate and squeeze about 3 medium zucchini dry like normal and then add all the other stuff (except Mozzarella cheese). Mix well and then you fry them in little 2-3 inch circles for about 2 minutes each side until golden brown. Serve with sour cream They are delicious!

We tried it and loved it! It took a while longer than I anticipated, but it was worth it! I substituted gluten-free flour and almond cheese for the mozz and parm, and it was very tasty. Next time I will try spinning the zucchini to remove more liquid because it took forever to bake until it was crisp enough to carry the toppings--perhaps ten minutes more than you had suggested. Oh, well! Great recipe!