One of my favorite hiking trails in the Fairbanks area is at Granite Tors. Its a 14 miles loop trail that most people do as a night over trip. Tim and I have been up both sides of the loop but haven't done the complete loop up by the Tors. The East side of the loop follows the river then a creek until it starts climbing up a side-hill. The West side of the trail goes through the tundra and lower muskeg. Right before we left town they put in a 3-mile loop which makes for a really nice walk that takes advantage of both sides of the valley's scenery.

I convinced some of my buddies to take a little wallk with me one night after work while I was in town recently. Here's one of the bridges that's on the new loop cross-over trail. 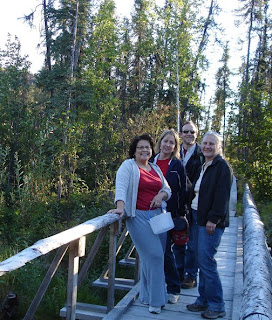 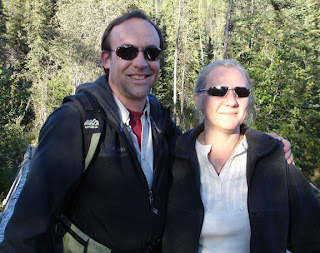 After we made the turn we walked a little ways beyond the trail back and headed up the west side. The blueberries started to get thicker as we walked up the valley. We found that they were pretty big right by the creek. Kim with the east side trail in the background. 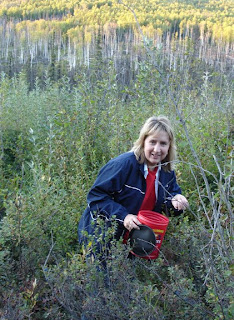 and Dorothy showing off the wonderful berries we found along the creek. 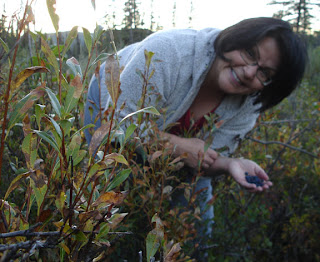 This was a strange hike...as we were starting out we heard someone calling and then when they finally got our attention a man told us his wife and two kids had taken off for a hike along the east trail at about 11 and were supposed to be back by 2 pm. He said that the rangers and helicopters were on their way. It was about 7:30 or 8 pm when we started out. We weren't sure if he was pulling our leg or what. We kept our eyes open but didn't see anyone who looked lost. About an hour later we heard a helicopter and then saw it start doing a searching pattern. On our way back we ran into a couple rangers who were sweeping the trail. And then we started hearing answers to their calls. When we got back to the parking lot they still hadn't shown up yet but we told them we had heard voices, and one that might have been a kid or higher pitched woman's voice. As we were packing up a young boy and a ranger can into view and it was the missing party. The boy seemed a little worried about maybe getting to trouble. He said that they were never lost - they just lost track of time. I guess the strangest part if this adventure was that they father never hugged the kid or expressed any strong emotion. He didn't actually start yelling. The ranger had to tell the guy to get the kid in a warmed car. We didn't stay to see the rest of the party come back. It seemed like maybe the mother had a hip problem and had to take her time. Anyway, really glad it turned out but it was a baffling experience.
Posted by Heidi Olson at 6:48 PM