We had a great hike a couple weeks ago and got to check several trails off our list as we combined a couple of trails to make a loop. It did require a 1-mile walk along the highway at the end but that was ok. We took time to collect misc. bottles, cans, and cardboard and ended up with an 6-pack of assorted beer cans and bottles. Too bad they weren't chilled and filled!

Our destination was Camping Cove (GPS 058° 38' 59.62"N, 134° 57' 52.25"W) via Cedar Lake. There's a state cabin at Camping Cove in the Point Bridge State Park that we've heard about but hadn't been to yet. We started on the Pt Bridget Trail and headed towards the meadow and Cowee Meadow cabin where we've hiked before. Didn't see any porcupine this summer.

After we left the Cowee Meadow cabin it was obviously a less traveled trail. But it was a nice little trail that followed the creek for a ways. Then the climb started. We didn't realize that there would be much elevation gain - it was only about 500 but it caught us by surprise. To encourage us along there were early blueberries out - if you got the ones that were facing outwards towards to sun then they were sweet. 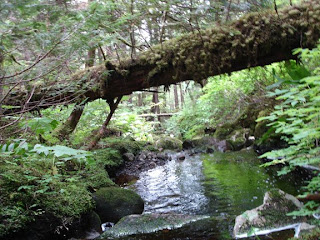 This is Cedar Lake (click here for map - look for Cedar Lake) with a big cedar tree in the right foreground. You don't see a lot of cedar trees around here - they might have all been logged or it just isn't the right terrain, I'm not sure. 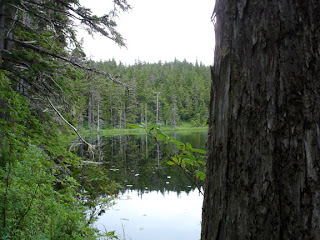 The lake was pretty inviting and if we had more time and had known what was up ahead we might have been tempted to take a dip. We found a small dock that we could have set up and used as a swim platform. And on one of the trees there was a rope tied off - way, way up. 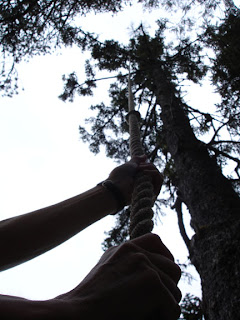 Here's Terri ready to make a jump for it! 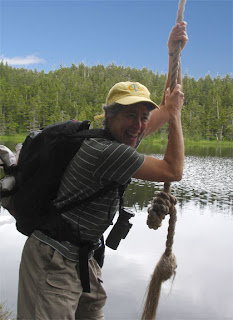 Something about the above photo....I quickly change the gray to a blue sky! (its a little sloppy...)

This is from the other side of the lake - the red arrow is where the rope goes! 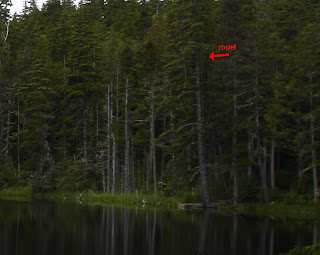 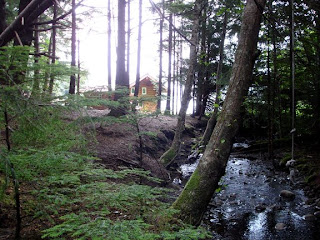 I forgot to take pictures of the view from the front steps of the cabin - it was gorgeous! We'll plan a trip here for an overnighter and I'll take pictures then!

The trail out wasn't marked very well but we basically followed the shoreline back to the North Bridge Cove Trailhead. We walked through a lovely forest where there was little undergrown - like a soft green carpet. The tail led us past a couple of private cabins which didn't really look like they had been occupied recently. I wonder if you could get an internet signal with the ATT WiFi? I'd have to figure out that bicycle generator thing too.
Posted by Heidi Olson at 8:12 PM