I just finished reading a book called, A Schoolteacher in Old Alaska, about Hannah Breece who was 45 when she came to Alaska in 1904 to teach in the schools. Its been very interesting to hear her stories. At one point she was in Ft Yukon and had to come to Fairbanks and I was just sure she was going to mention my Great Aunt Flo or my Grandmother who came to Fairbanks in the early 1900s but then I couldn't remember exactly when they were in Fairbanks, it might have been a bit later like in the 1910s.

This lady taught at Afognak, Wood Island (off Kodiak), Iliamna, Fort Yukon, Wrangell, and Douglas - about 2 or 3 years at each place. She liked the challenge of going in and getting things set up and then moving on. It's interesting to see that the school became a the center of the community. Her directive came from Sheldon Jackson, the federally appointed US General Agent of Education (head of the Alaska Division of the Bureau of Education in the Department of the Interior). You should know that Alaska didn't become a territory until 1912, before that it was a District and was managed by a military overseer. And before that it was the Department of Alaska was under the jurisdiction of the US Army, US Department of the Treasury and then the US Navy. It wasn't until the discover of gold that Washington DC interests in promoting further settlement in the area became great enough to start its financial growth.

To instruct a people, the greater portion of whom are uncivilized, who need to be taught sanitary regulations, the laws of health, improvement of dwellings, better method of housekeeping, cooking and dressing, more remunerative forms of labor, honesty, chastity, the sacredness of marriage relation, and everything that elevates man. So that, side by side with the usual school drill in reading, writing, and arithmetic, there is need of instruction for the girls in housekeeping, cooking and gardening, in cutting, sewing and mending; and for the boys in carpentering and other forms of wood working, boot and shoe making, and the various trades of civilization.

It was to furnish educational advantages to a people, large classes of whom are too ignorant to appreciate them, and who require some form of pressure to oblige them to keep their children in school regularly. It was a system of schools among a people who, while in the main only partially civilized, yet have a future before them as American citizens.

Everyone has heard the stories about other American teachers and missionaries punishing native people for trying to keep their culture alive, it appears though, that Breece as a little different. Breece didn't punish children from speaking their native language outside of class time. English was strictly spoken inside the school walls. When she offered sewing classes she encouraged the girls and women to use traditional skins and animal body parts and herself was never opposed to wear these garments herself. When it became clear that the start of school would happen before the families returned from summer fish camps, she moved the school to where they were so that the students could be included in the family activities during part of the day and not miss out on their lessons. She also encouraged men and women from the community to participate in the activities and recruited their expertise in mentoring children who didn't have immediate family to help them. She also talks about her goals is not "whitizing" the children and their parents, but "civilizing" them, a distinction that clearly was not commonly made.

The following image is from the book. She talked about having to climb down the rope ladder from the sailing vessel that would take her to her remove communities. At first she refused and made them lower her in the boat as it went over the side. But she soon became accustomed to it. Image going down a rope ladder or any type of ladder in a full-length skirt! 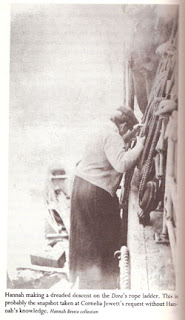 This book is edited by Breece's great niece, Jane Jacobs, herself an accomplished writer, "about cities and virtues of urban disorder… ." In the commentary following the memoir it did strike me that Ms. Jacobs didn't make a trip to Alaska for research purposes until she was well into her 70s – clearly, adventure runs in the blood!
Posted by Heidi Olson at 4:09 PM