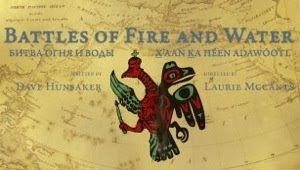 This last weekend Tim, Barb and I walked up to the Perseverance Theater to see their newest play called, Battles for Fire and Water, a portrayal of the Tlingit and Russian conflict in 1804 in Sitka. The production was very good and the acting was great. The part of Baranof was very well executed and the physical characteristics were so very close to what I had in my mind when I think of that Russian America Company leader. I'm constantly impressed with the quality of productions that come from the theater. The production was spoken in three languages: English, Tlingit and Russian but it didn't seem confusing or repetitive. Even the actors took on contrasting roles: sometimes they were the Tlingit and other times they were the Russians. The Empire has a good synopsis.

The play was inspired by Anooshi Lingit Aani Ka, Russians in Tlingit America: The Battles of Sitka 1802 and 1804 by Nora and Richard Dauenhauer and Lydia Black. All authors have done a lot of research on the Tlingits and the Russians. I have heard very good reviews on the book as well as on their other works.

Since I'm taking an Alaska History class this semester, this play was a great review for me and I really enjoyed some of the more obscure word choices and actions. I guess the only way I would have enjoyed it more is if I understood Russian and/or Tlingit!
Posted by Heidi Olson at 5:29 PM