Wants some beef with those tires? 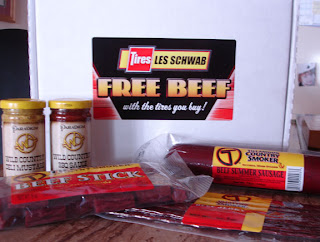 We had some new tires put on the Yukon and got something else to chew on at the same time! We got a pretty good deal - 4 tires for the truck and extra spare tires from all the processed and fatty sausage.

Because of food allergies, we don't normally seek out sushi restaurants but this would be one we might have to look for next time we're in abroad, Inamo restaurant in London's fashionable SoHo district. Touchscreen menus for choosing and ordering your food, paying your bill (will separate by order if you're with a group), webcams in the kitchen to see if your food is being spit in or tenderized by being dropped on the floor, and more. Who would have time for eating!

We went to Tarentino's Italian Restaurant for my birthday celebration. Located where the Wild Spice was and before that a Russian Tea House, this new establishment openned around the first of the year. We started out with a nice green salad with mixed greens and the house italian dressing. The dressing was made up of marinated roma tomatoes in a flavorful oil and vinegar mixture. Crusty fresh garlic bread kept us going until the main course came. I had Shrimp Diablo on a bed of angel hair. Spicy red sauce with at least a dozen shrimp. Tim had the Veal Parmagian and the house pasta. Two large filets filled his plate. The food was pretty good. We've had better and we've had worse food. The service was very good. We got there just in time to get a table and the place was packed. Where they had the big round mongonlian grill they have set up bar seating with what looked like a stainless steel bread warmer sitting on the grill itself. We'll go back someday and give it another try as its one of the better places to eat in Juneau.
Posted by Heidi Olson at 8:56 PM