For one of my last biography readings in my Alaska history class I was taking, this was a fun read, Wyatt Earp and Friends, by Howard Clifford. The Novel, The Winter Wolf, by Richard Parry, seemed to follow along with the Clifford book and was also fun to read.

Born 1848 Illinois into a longtime American family, he was the 6th generation. His father was town Marshall so Wyatt grew up in law enforcement environment. At 13, he ran away to join in the Civil War (north) and the first officer he found to report for duty, happened to be his father and he was sent home.

As a young adult he had many jobs: constable, railroad crew – caring for horses and supplying food, buffalo hunting, and as bartender and gambler which became a constant and favorite source of income. Throughout his travels he met many frontiersmen, those in law enforcement, wranglers, and gunman.

The most important lesson I learned from those proficient gunfighters was that the winner of the gun play was usually the man that took his time. The second was that, if I hoped to live long on the frontier I would shun flashy trick shooting—grandstand play— as I would poison. pg 12

He is most famous for the shootout at the OK Corral – there is no record that he actually killed anyone and it was really his brother and good friend Doc Holliday who had the feud with the Clanton gang. In fact – he wasn’t even initially mentioned in any of the news accounts.

After the incident, Wyatt traveled around with west with his second wife, Josie. They went to ID, CO, WY, TX

1895 Shaky-Fitzsimmons boxing match in San Francisco was much advertised as the match of the season. Wyatt had become involved in the boxing circle, mostly as a respected referee. In the end it was said that Wyatt awarded the fight to the wrong man and there were accusations of giving the fight away for $$. Time to pack up and leave town for awhile until things settled down! This was one of the biggest scandals in the boxing world until Mike Tyson and the ear biting. (or so said the author)

1897 departed Seattle for Alaska to meet up with Soapy Smith. They had crossed paths in CO where their wives had gotten acquainted. When Soapy started taking over Skagway, a mutual friend knew they would need someone to keep “law and order” and they both thought of Wyatt.

By this time Wyatt may have had warrants out for his arrest for various financial misdealings. Even though he had been in law enforcement, this didn’t mean he wasn’t always on the right side of the law. He often used it to his advantage. When the ship pulled into Wrangell, he saw the Marshall standing on the dock and thought he was in for it. It turned out to be an acquaintance he new in the SW (who had also done jail time). The Marshall asked Wyatt to help him out as deputy while waiting for the next passage to Skagway. When the ship finally came they had a stop over in Juneau and here is where they heard that Soapy wasn’t in Skagway at the time AND that Josie was pregnant so they decided to go back to SF until the baby was born and travel was easier. This might also have been when he left his pistol in Juneau locked up at the Marshall's office while he was in town. It is supposedly at the Red Dog Saloon but I haven't verified that. 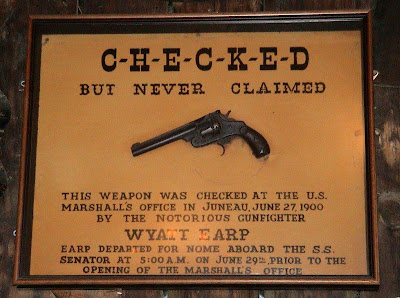 Wyatt later described Wrangell as “just like Hell-On-Wheels,” which in the old days was the term used to describe the unruly camps at the en of the rack as the Union Pacific rails headed West.

Wyatt was more into business – looking for his big opportunity in gambling, liquor, horse racing, boxing, transportation – whatever would make a buck!

Josie lost the child and they soon after decided to head to Dawson for the rush, as Skagway was already starting to see a decline in travelers. They decided this time to take the all-water route. They arrived in St Michael in last summer and took their chances heading up the Yukon river. Due to approaching winter and ice in the river they only make it as far as Rampart.

1898 Rampart was a temporary settlement of from 1-2000 during the gold rush and became home to many who were making their way to Dawson. Home to Rex Beach, Jack London, Robert Service, Joaquin Miller, Elmer Stroller White (known as the Mark Twain of the North and eventual member of house of representatives of Alaska Territorial Leg), Sid Grauman – Hollywood’s Chinese Theatre, Tex Rickert (built Madison Square Gardens).

I know that our Uncle Gus Conradt also made Rampart his home about this same time period, also being stranded by the river freezing up. I know he talks about Rex Beach but i don't think he mentioned Wyatt. And from what I've been told, I'm pretty sure that they would have gotten along really well as they seemed to have shared similar attitudes and morals. The Earp’s rented Beach’s cabin as he was out trapping and wasn’t in town very much. Wyatt became a bartender for the winter.

So here is something interesting and reinforced what I read in another biography about the teacher in the 1910s who was in Fort Yukon. Dogs knew that the paddlewheeler was coming before the people did – the cooks saved the table scraps for the dogs and fed them when they pulled into town. There is a similar story in A Schoolteacher in Old Alaska (Hannah Breece).

During that winter, a young couple wanted to get married. There was no satin material for a dress so the women got together and sewed up burlap and added hundreds of “Sparklers” by cutting tin cans into small bits and sewing them on the dress accompanied with a mosquito netting veil.

When the river started to flow again, Wyatt was approached about going to St Michael to run a canteen for a good percentage of the profits. The rush to Dawson was starting to dwindle so they decided to spend a year running the canteen. But the next year the lure of Nome and the newest, biggest, gold rush was too much and they headed up the Bering sea.

July 1897 – arrived in Nome to miles of tents strewn up on the beaches. Decided to build a wood structure and in the following year the had the first 2-story building called the Dexter. Profits must have been good because they decided to spend the next winter in SF and along the way they opened up a saloon in Seattle.

During these times, local option often pre-empted US law and here is one example: The sale of liquor was supposed to be prohibited since Alaska was considered Indian Territory, but if a majority of the men AND women in the area approved the sale of liquor then you could go ahead and did it. This was the first known record of American women being allowed an equal vote of men.

In general there are numerous accounts of misbehavior by Earp in the newspapers that can’t be confirmed – too many conflicting dates and reports in the various newspapers (San Francisco, Seattle, Alask) that don’t seem to jive. But all reports seem to agree on the incidents:
jumping claims, interfering with arrests, getting into fights. Reports were also mixed when describing Wyatt’s character: some say he was less than popular, others say he was well-respected. His reputation certainly prevented any gunfighter incidences from happening in the area.

He was as crooked as a three dollar bill. He and his brothers were racketeers, all of them. They shook people down, they did everything they could to get dough.

Greatest Disappointments
Josie – not to have meet Soapy Smith
Wyatt – in 1900 a Deputy Marshall was to be chosen and Wyatt was the obvious choice, but another man was selected

After Alaska, they headed to Nevada and opened up another saloon/gambling joint. Retired to LA and was often called upon for special security jobs. Hung out at the studios and had a brief appearance in a Douglas Fairbanks movie in 1916. He came to know Marion Morrison (John Wayne) who has said that he based some of his western characters on Earp.