We've had several new birds to document lately - either to add to our life list or ones that we've seen before but not in Alaska. A new life-list bird is a Hooded Merganser which we've seen several times recently at Twin Lakes (map - look for Twin Lakes). These birds are really beautiful and can be seen easily without binoculars because of the large white feather headress.

Twin Lakes is made up of a continuous man-made lake that runs along the Eagan Highway. This rec area has a 1-mile bike trail alongside it that is especially nice when there's lots of snow. This is the park at the south end of the lake. This is new this summer. 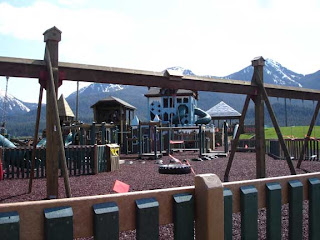 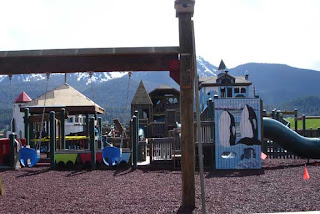 The other bird is a Northern Shrike. We've seen these outside but this was our first in Alaska. I noticed that this picture on the Cornell Lab site makes the bird looks relatively tame and almost cute - but let me tell you - they are mad, mad killers. It all happened at "Carnage Cove." 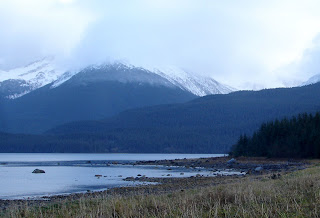 We were enjoying a turnaround treat with friends Terry and Oso a couple of weeks ago, when out from the meadow flew a bird that looked similar to a gray jay but there aren't any of those seen around here. The gray bird was chasing a smaller bird (probably a junco or chickadee) from the trees edge in the meadow out over the ocean and right towards us. As they got closer the gray bird struck out at the smaller song bird (the Shrike is a song bird too - as well as the Raven) and brought it down to the ground. I tried to focus with the binocs but right as I got them in the frame the gray bird grabbed the smaller one in it massive, hooked beak and flew off to the woods. No doubt about it - it was a Northern Shrike, aka the "Butcher Bird"!

** (added 10/24 at 7:37 PM) I almost forgot! We also saw several American Coots at Twin Lakes. We've seen these all over California and the southwest but this is our first sighting in Alaska.
Posted by Heidi Olson at 9:04 PM