We had a great walk today - we thought we were going to get rained on but it didn't happen and we had mostly sunny, blue skies for our entire walk. In fact we just wore sweathshirts and jeans. Last summer we walked on part of this trail until it veered off and took us to Spaulding Meadows through a couple of beautiful meadows and then into some really muddy, slippery gunk.

Today we took the other trail, the Auke Nu Trail (look for Auke Nu Trail ) which goes up to a forest service cabin through more meadows and I think eventually connects to the Spaulding Meadow trail if you have a map along with you.

The beginning of the trail was snow and ice-free! 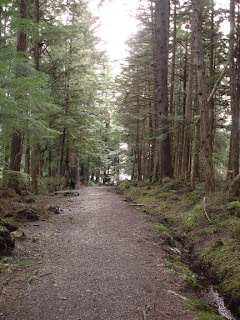 Then we got into a bunch of ice but then when we got a little higher we had mostly snow that had been pretty well packed down. The weather has been such that the snow is starting to get pretty rotten though so in those areas that weren't already walked/skiied/snowshoed and packed down, these spots were pretty soft and you found yourself sinking up to your kneecaps. Luckily we made it up and back with our yak traks still on our boots.

Don't let anyone tell you differently - this trail went straight up and didn't stop. It was a 1552 elevation gain over a 3-mile area and it felt like it. You also forget that most of the trail is probably made up of boardwalk so if you get off the boards a little bit then you sink right down and will probably end up with a wet foot! Alas, we didn't make it to the cabin. We didn't take a map and forgot to look at one before we went out. We got to the point where we were crossing a meadow and every step we took we were sinking down and it quickly became not much fun as we eyed just how long the meadow was. I think we were probably pretty close though because there were a lot of old ski tracks around and we'd been walking forever.

The way down was pretty fast but we had to be careful because the trail was really punchy and with the added weight you have treading downhill we made a lot of holes. There were a couple of beautiful creek crossings with nice bridges going across them. Looked like nice places for a picnic.

We also saw a Hairy Woodpecker chipping away at one of the hemlock pines. It won't be long before we begin seeing a lot more birds as they mirgrate back for the summer.
Posted by Heidi Olson at 6:23 PM