The Alaska Folk Festival is going on this week, the 34th annual. Every night there are 15-minute acts that go for 3-4 hours. The event is free so you can come and go as you please. We went last night and stayed for a couple of hours. The auditorium was packed and the gathering areas and hallways outside the auditorium were also packed. People were warming up and impromptu jam sessions were setting up through the hall. There are workshops, special guest artists, dances, and lots of music. I don't think I've seen so many fiddles and mandolins in one spot before! We listened to cowboy campfire songs by a 75 year old guy from Tagish; a duo playing Bob Dylan on guitar and mandolin; a really nice younger group that we heard up at the Island Pub a couple weeks ago, called One Aisle Over, mix of blues, international, rock with some very nice vocals; a young girl (high school) on fiddle and her fiddle teacher on guitar playing her pieces for a NW fiddling contest she's going to next week (a hoe-down, waltz, and player's choice sequence played one right after the other) – this really got your toes tappin'. Then there was a group of ladies who sang three different songs - a really nice duet by two girls we've seen in Perserverance shows, a yiddish song, and a hawaiian song including some hula dancers and the final act was a band that will be playing at another local club featuring folks songs with heavy bass. The thing was the bass' amp wasn't working so we only got to see him strutting around on stage...it would have been funnier if he'd have been overweight (…heavy bass…).

I took my spoons with me last night, hoping to get picked up but the opportunity didn't arise. I'll keep them in my back pocket when we go later this weekend. 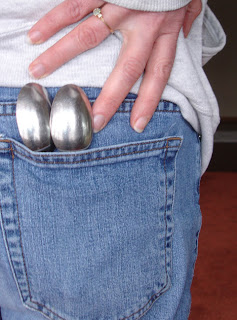 Every time I read your blog I get hungry! You ALWAYS have such yummy recipes, and yummy pictures. The folks festival sounded awesome. I wish I could've been there! I'll make it to Juneau one of these days. Promise.