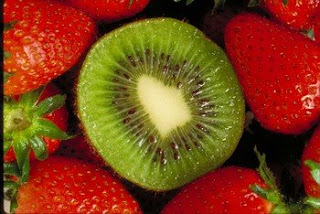 We thought we might some folks over to the house on Friday event who were visiting from Fairbanks but it didn't work out. I had some nice fresh fruit from the Full Circle Farms grocery delivery (kiwi and strawberries) so I made up a fruit pizza in anticipation of their visit. If I make this again, I'll definitely make the cookie crust is smaller portioned sizes as it doesn't holdup so well if there's only two of you unless you sit and eat the entire thing in one sitting. Luckly I decided to hold off on the assembly until it was closer to their arrival time. I just cut the cookie into smaller chucks so none of it got soggy and wasted. One change to this recipe - I didn't have any whipped topping but I did have vanilla yogurt so I just used that instead. I don't think I used the 1 cup like it called for - more like 1/2 to 2/3. I thought it worked out pretty well. (aka yummy)

There seem to be an abundance of kiwi fruit in the fridge - I think they may be procreating in the fruit drawer in the fridge and although I do like them just sliced up fresh I've been looking for other recipes. I found this one Kiwi Pork Midora that sounded pretty good. I might try it out this week.
Posted by Heidi Olson at 5:32 PM