Some people have left over coffee 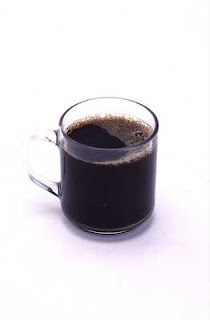 Tim's folks were visiting this weekend and the day they left to catch the ferry they didn't get a chance to drink the coffee before they had to leave the house. So we had some left-over coffee and I hated to pour it down the drain. I really love dark, slightly sweet bread (and the same for beer for that matter) and I often will often a dark bread using coffee (or espresso) and a mixture of flours (rye, whole wheat, white) but I diodn't have any rye flour and I'm not planning a grocery stop for awhile. So I did a web search and came across this recipe for Iced-Spiced Ginger Bars. This was a good find because I've been wanting to make some ginger snaps but just haven't gotten around to it and this recipe sounded like it would satisfy my ginger fix and use the left- over coffee as well. I just made a 1/2 recipe and baked it in a 9x9 pan. I decided to replace the eggs with ground flax seed so I used 2 T ground flax and 1 T water to replace the 1 egg the recipe called for.

YUM! This cake is very moist, spicy with the cloves, ginger, cinnamon, and richly dark with the coffee and molasses. I kept some of the coffee to add to the icy but I decided not to make the icing because the cake doesn't need it.

The coffee was made from decaf beans so it won't keep you up all night either! (well maybe the sugar will...for a minute)
Posted by Heidi Olson at 7:09 AM

Woah! I didn't know you could substitute flax for eggs! I am going to try this!

I got that information from your friend Joe at YOUR wedding - the cornbread recipe (now my favorite) that he used didn't have any eggs in it and used flax as a replacement. I normally use 3 T flax seed and 1 T water for 1 egg. I love using this replacement in chocolate cookies because it gives that little nutty flavor!

In the package of flaxseed meal I bought it says to use the flax as a substitution for shortening or cooking oil at a ratio of 3 to 1 in baked goods. So 1 1/2 c flaxseed meal can replace 1/2 c butter, margarine, or cooking oil. Watch out for quicker browning!