This is the second week that my Full Circle Produce box has been delayed due to cancellations with Alaska Airlines and the volcano. Its not a problem, I certainly understand that they are doing everything they can do to get the boxes here on time. I'm supposed to get the box on Tuesday and it arrived on Friday. It just changes the menu a bit when it doesn't show up on time. I rarely buy fresh produce at the store anymore because the one box a week usually fulfills our needs but that doesn't mean we can't make a quick trip to the grocery or pull out something frozen or canned.

In fact, I went to Fred's this afternoon to do some grocery shopping, and I realized that they may have been dealing with some of the same shipping issues. You know how they normally have an entire wall or showcase filled with those bags of greens: baby spinach, romaine, garden salad, coleslaw, spring mix, etc. Their entire display was empty. Not a plastic bag full of greenery to be Found.

This really brought home some of the discussion we've been having in the Alaska history class I'm taking – the fact that Alaska has been, and still is, and may never change from being a colony. Our main text is Stephen Haycox's, Alaska: An American Colony. It has a great introduction to the state's history beginning with the Russian occupation (a colony of the Czar and Czarina's) and going through WW2 and then changes direction and talks more about how due to Alaska's abundant natural resources, distance from the lower 48, and inclement weather, Alaska may never be a state that can self-sustain itself. It will always be a place that has to rely in importing goods (and some services) due to many factors.

This empty salad display got me thinking about the Russians – they almost starved to death and one of the reasons they wanted to sell the land to the US is because they were having a hard time trying to get shipments of food stores. They couldn't depend on their own country and they tried Hawaii with no luck and the Spaniards in California with small success but nothing sustainable.

When the goldrush came, once again food stores were hard to come by. Like many settlers in Alaska, some with experience in farming and little experience in panning and mining turned to agriculture and farming.

I just finished a book called, Kendlers: The Story of a Dairy Farm in Alaska by Mathilde Kendler, a charming and fast read about working a dairy farm in the Mendenhall Valley from the mid-1920s to 1965. Just think about all the changes this family saw in that short time – rise and fall of the great mines, long distance phone service from your own house (if you had it) in 1939, pre-war building of the airport in 1941, incoming soldiers during WW2, creamy, fatty milk to pasteurized milk.

It was especially fun to read about where their farm was located in relation to what is there now. They had almost 500 acres and here's a picture of their field right in front of the Mendenhall Glacier. 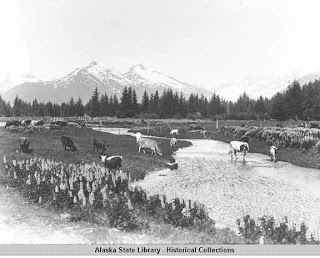 Sounds like their pastures and farm buildings have been replaced with a Safeway, a couple of housing subdivisions, a large highway and some other commercial property.

I believe that we now get our milk and milk products imported from washington. In fact, if I recall my trip to Fred Meyers correctly, the dairy isle was as empty as the bags of salad display.