We had an awesome bike ride to the Herbert Glacier on the Herbert Glacier Trail (map - see Herbert Glacier). This was a 4.6 mile pathway, graveled and well packed for bikes. It looks like the weather was pretty gloomy but it was actually quite nice with partly cloudy skies that broke up when we got to the end of the trail and then came back in on our way out. I don't really know what the temperature was maybe in the mid-40s.

We averaged 8 mph going in and about 10 mph on the way out. I think the elevation gain was about 300 feet. The pathway ran along the Herbert River for maybe a mile and there were several spots where you could have gotten to the sandbars and beach along the edge. We found a couple interesting places that might be good fishing spots for next spring. As with most of the trails around here this one followed an old tramway bed that carried supplies out to a mining camp so there was lots of interesting stuff to look at on the way. 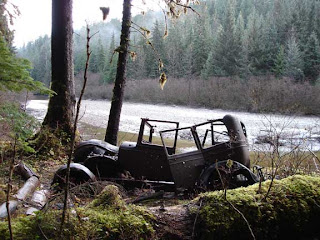 After about 4 miles the trail became a little more challenging and a lot more fun!

This was cool - walking the bikes through a stream along some stepping stones - it took us awhile to find just the right boulders - they had to be tall enough to allow their tops to stick out of the water and flat enough to provide safe footings. No, really, someone else did all the labor and we just reaped the benefits! I've been reading a book about survival in the Amazon and I was watching out for anaconda and caymen as I crossed this stream. Didn't see any. 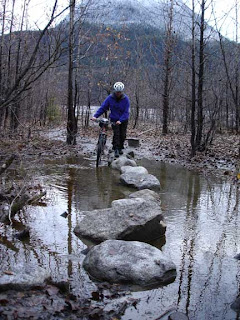 This looked a lot steeper in person than this picture shows - we opted to walk our bikes around this cliff. The dropoff was only about 8-10 feet down but it went right into the river and we don't know how deep the cut was! 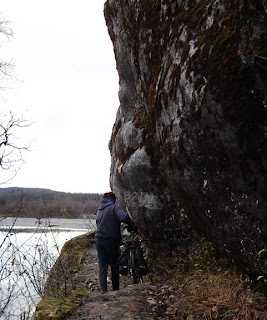 At about the 5-mile marker we came to a spot where you could really see the glacier. As it happens this is probably the best viewpoint to see it - as you got closer to the glacier there's a rocky hill that divides the glacier and you can only see half of it at a time. 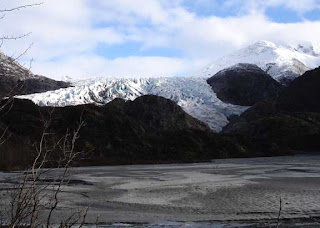 It was at this point that we decided to ditch our bikes and continue on foot so we could get closer to the glacier. We walked over and then realized that there were two drainages so we picked one. We walked up this little valley created by the glacier stream. This little valley was truly my best and greatest experience with boulder scrambling. It was all the same rock - one gigantic rock! There were fissures and crevices but very few pebbles or shill that sometimes makes getting over the boulders harder because you slide. This trek was awesome! 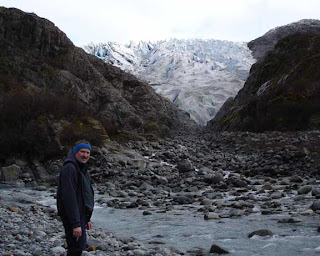 The headwaters of the Herbert River was a blue-silty stream that flowed through the huge rock with quite a force. You could see areas where it had been higher - probably in the early fall when there was lots of melting and some additional rain. There were several pools that looked pretty safe for wading but I image that its pretty cold! There were also some shoots that looked like they might be fun in a kayak if you had any experience. 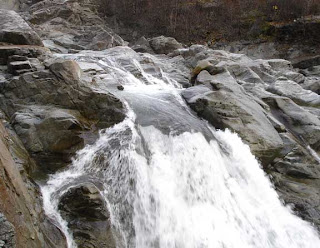 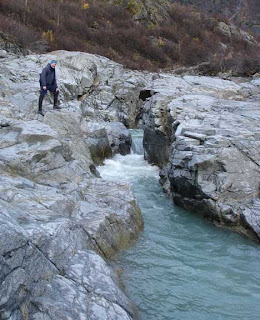 Cool rocks with quartz veins running though it. It was interesting to see where the lines were and how they extended from one side of the gorge to the other. 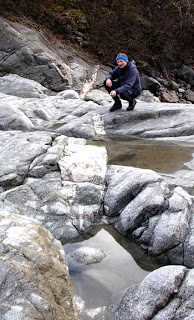 It was a great day and it was so much fun to have one last bike ride this late in the year. This trail makes it on our top five trails in the area and would be a perfect walk for just about anyone!
Posted by Heidi Olson at 6:41 PM

Your pictures are just gorgeous! Thank you for sharing this beautiful trip with us!