Last Ship of the Season

Juneau say's goodbye to the last cruise ship of the season. I heard that there was a big party downtown at the Hangar - the place was probably filled with seasonal workers for their big night out before heading down to the caribbean to set up their tourist shop for the winter.

In this shot on the left you can see the last Jet Boat returning from the eco-friendly zip line along the Treadwell Mine. This was the last day for the tram to Mt Roberts to be open. (Luckily this wasn't the last car down or I would have had to walk!) and to the right, above the lovely blue smoke from the cruise ship is one of the last float plans taking off to go to the Taku Lodge for a salmon bake and float plane ride. 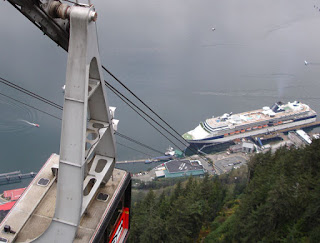