What to do with cantaloupe 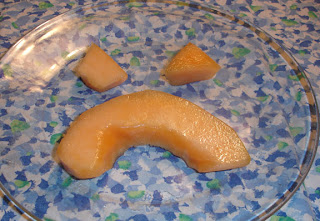 We got a nice cantaloupe in our food box this week. I don't really like cantaloupe. It just tastes funny to me. Sometimes buy them and then force myself to eat them because I know they are good for me. But I'm sure I crunch up my nose when I take a bite. I don't normally eat it in public. So why did I think it would be any different to get an organic one in our food box? Good question. So I started to look around for some recipes so it would not spoil sitting on my counter.

I found a recipe for bread that said, "This is out of this world good - so moist you would
never suspect cantaloupe was used!" Out of this world, might be an overstatement, but they weren't too bad. I would add some nutmeg or cinnamon if I made them again.

We made some pad thai with a japanese eggplant and chicken on saturday night before Tim's brother, Marc, left for the airport. I thought I'd make a little spicy, sweet salad to go with. I used my fancy-dancy cut-myself-every-time-I-use-it julienne slicer and cut thin strips of cantaloupe and mixed it will a little crushed red pepper, and a big squirt of lime juice. I let it sit for a couple of hours. This was delicious and just the right cool, sweet, and spice to go with the dinner.

For the final pieces of that orange stuff I paired it with my other least favorite fruit a banana, to make a smoothie with some vanilla yogurt. I had some mixed fruit jam I made early in the summer so I added a spoonful of that to give it more flavor. YUM!
Posted by Heidi Olson at 6:58 PM

I thought I was the only one in this world who didn't like cantaloupe! WOW! I feel related to you or something... I wouldn't mind trying your Thai recipe, though.