When I first saw the picture of this scarf I was intrigue by the look and thought that it would be fun to make. The pattern came from a calendar that Tam gave me for the date of August 13, 2009. It was originally from http://tattingmydoilies.blogspot.com/ which describes the pattern as "It's as fun to wear as it is to make!"

I wasn't able to find the same yarn that the pattern called for so substituted with a soft wool blend in a  heather rust called Queensland Collection - Rustic Tweed. The pattern required a set of straight needles plus a couple of double-pointed needles to make the loops (I-cord). 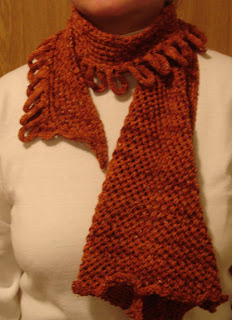 After blocking it our and looking closer at the pattern, I realized that I might have misunderstood the pattern and didn't connect the loops in the right place. There were a few errors at the beginning of the pattern that I was able to figure out and may have assumed there was an error in the loop section as well when it didn't make sense. It was only after I finished that I thought to look at the website and see that the creator had posted an addendum to errors but nothing about the loop attachment. And now I'm pretty certain it was a heidi-error. Should have looked there before! Oh well!
Posted by Heidi Olson at 8:16 PM