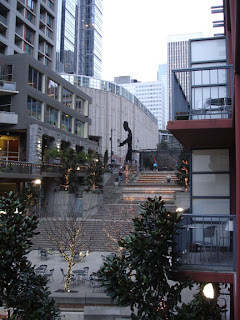 We had a great trip to Seattle last month. The weather was pretty nice – little rain and mostly clear skies. We stayed at a hotel downtown so that we could be close to some good restaurants and the qwest field where the Seattle Boat Shop was located. We had a nice room that looked out over the harbor steps. At first I thought it was going to be noisy but it wasn't.

We had great meals at some of our repeat restaurants: Ipmanema Grill, Steelhead Diner, Umi Sake House (although I was disappointed that the heated toilet seats were turned off), and Palomino (although the portions were very petite). New to us restaurant Taphouse Grill was bleh although I did enjoy seeing the 160 beer taps behind the bar. But I only wanted 1 beer, not 160. But La Vita e Bella restaurant in Belltown is a keeper. The food was good and the waitstaff was very attentive. I had the porchini mushroom ravioli - delicious!

Another reason we wanted to stay downtown is that we wanted to take in Avatar 3D at the IMax at Seattle Center and we wanted to be able to walk to it. WOW. Even if you don't have access to an IMAX you have got to seek out the movie in 3D. What an experience! I didn't even get a chance to eat my popcorn!

The boat show was amazing! I have never seen that many shiny expensive boats all in one place. It was great to be able to go aboard to see the different layouts and to see what accommodations might be like. On some of the newer models the layout is would be perfect for us. But we'll have to wait for about 5-7 years when these models become used before they will be parked outside our front steps! 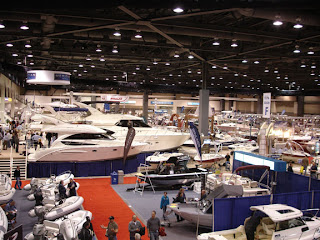 Probably one of most interesting boats was the Sealegs - an amphibious boat available in either a rigid inflatable hull or an all aluminum boat. Except for not having a hard top on it, it would be great for SE. There are alot of sand/small rocky beaches that you could pull up to and drive up out of the water and not have to worry about setting an anchor. The tide is so variable in Alaska it would be great not to have to worry about your boat. 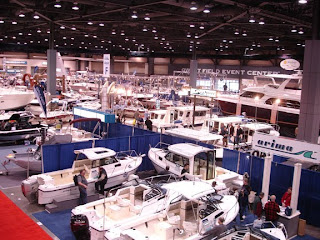 We also looked at different power catamarans thinking that they would be really seaworthy and stable plus they seem to give you a lot more inside space. We liked the ArrowCat and the one they had in the boat show had a solid bulkhead which you really need here. And we liked the Aspen model too. 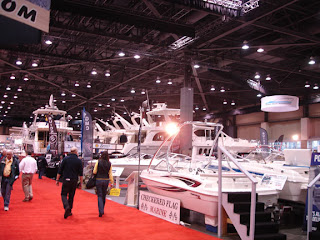 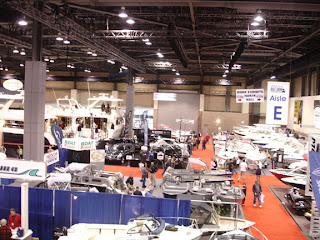