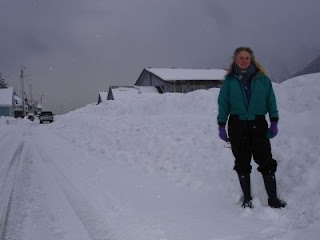 According to the Juneau Empire the total snowfall for the area is nearing the highest amount recorded of 194.1 inches in 1964–65. As of Friday the total was around 182.9 and we've had several inches fall since then. I don't think that the predicted 6 to 10 inches really came but there's still a storm warning in effect until sometime on Sunday so this might be the weekend. Snow is expected everyday next week.

So we have some snow and its starting to pile up. I'm not complaining because its been 40-60 degrees warmer than Fairbanks temps which has made a lot of difference in my desire to get outside. I switch off between hiking boots and rubber boots depending on how deep the snow is and haven't had any problems getting around with the blazer. We've been avoiding the steeper hills in downtown Juneau and pretty much stick to the main streets. We can park at Tim's office parking lot when we go into town and walk to anyplace we are going so that's pretty convenient.

The house has a metal roof so when it starts to pile up is starts to slide down curving under the eaves like wood might do over steam. At some point the mass gets too heavy and it falls onto the deck with a "whoomp." 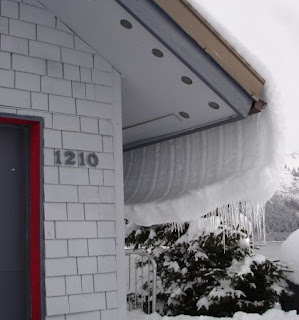 Did we mention that the landlord lives next doors and does all the shoveling? *sweet*
Posted by Heidi Olson at 6:45 PM

I love the photo of the snow sliding off the roof! Looks like you'd better not spend too much time on the deck without an avalanche beacon!