Dragon Inn and Motel was our destination for dinner one evening last week. We're on the hunt for some dining room chairs and all of the furniture stores are in the valley so we thought we'd make an evening of it by looking for chairs and having dinner out. I understand that this restaurant used to be located downtown but moved out to Lemon Creek after the building burned down a couple summers ago.

There was only one other party in the place and the dad was showing his two young daughters (3 and 4 maybe) how to use the chopsticks as drumsticks on the table, on the plate, on the glasses…it was quite the experience…if he was doing that in a restaurant what is it like at home?

The menu was similar to alot of chinese restaurants we've been to around the country. We ordered some chicken dumplings which turned out to be deep fried but the guts were tasty. It was served with some sweet and sour cabbage slaw which was very good. We also ordered General Tsaos chicken and Pork Mu Shu which were both pretty good. The chicken wasn't as sweet as I've had it before and had more of a chili flavor. I've gotten so I really like Mu Shu–Tim's gotten really good at making a vegetable mu shu and once we determined it tasted just as good with regular flour tortillas instead of making our own pancakes it makes a quick dinner. Stay tuned for his recipe.

Once the girls had finished drumming and picking at their food they were allowed to run around the restaurant and finally ended up at our table with their fortune cookies. At one point "Beca" decided to play the seefood game with us and her cookie. How charming. After an obligatory apology from the father given without much feeling the girls and their father left the building. At that point we had been rushing through dinner because the ambiance was so uncomfortable so we packed up the leftovers (only the mu shu), had our own seefood game with the fortune cookies… 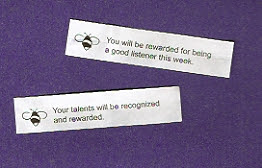 and are awaiting our rewards.
Posted by Heidi Olson at 5:44 PM

I guess you will be getting two big rewards this week..one for listening to the "concert" at the restaurant and one for being so talented at making furniture out of packing boxes...so ingenious! Robin