I decided to use up the scraps of wool yarn that I had leftover and make a floor rug. I ended up by purchasing a couple extra skeins to get it finished up to a decent size so now I have different left-overs! I randomly cast on 136 stitches and decided to do a garter so that the rug would have ridges.

As I was waiting for the washer to do its felting thing, I read from At Knit's End: Meditations for Women who Knit Too Much, a gift from Shari when leaving Fairbanks.

Only Allah is perfect. – Persian Lore

According to the author, Stephanie Pearl-McPhee, persian rug weavers always make a point of weaving in a mistake in their products to show humility in Allah's great presence. I'm an expert at showing humility.

After a short time in the washer I noticed a lot of fuzz in the water and when I finally pulled the rug out of the hot water (it was quite heavy) I realized that one of the yarns had almost disintegrated in several spots and I now had a rug with several holes in it. UGH! 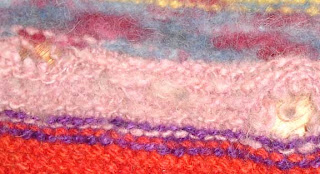 I wasn't sure what to do so I put it away for a couple of days to think it over. The stripe was right in the middle of the rug so I couldn't just cut it off and try to bind it and I didn't have any extra yarn the same color to patch it up. There were several other spots where the yarn had pulled and it was just a matter of time before more holes were created. I started picking up the stitches from one side, cutting away the bad yarn as I went. The purple side was pretty easy to see so the picking up went quickly. Then I picked up stitches on the other side which was much harder because it was variegated and really fuzzy. Amazingly enough when I finished I had the same number of stitches on both sets of needles. I had in my mind now two choices, add another color and refelt it and hope that it would look close to the same or bind the two sides off together making the rug a little narrower. I chose the later. 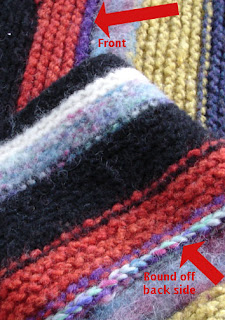 I decided to go ahead and refelt it and now I am done and will move on . 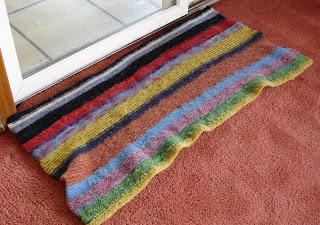 I have a lot of humility in this rug.
Posted by Heidi Olson at 1:25 PM

You continue to amaze me with your knitting talents! Roxi

How thick is the rug? I'm thinking I could use some remains from the stash for placements. Boy I'd have been majorly bummed by the mysteriously appearing holes.

I think it would work well for placements. I read somewhere on the web that there's a method to use to reduce the "lettuce leaf" edge that mind appear along the edges of flat pieces. I didn't do it on the rug and can't remember where I saw it. I can kinda see it in some of the strips. Since the wool wasn't all the same it didn't felt the same so some of the strips are denser than others. Its about the thickness of a rag woven rug like they sell at the Rag Company. With most of the yarn I used a double strand except for the really chunky ones where I just used one.