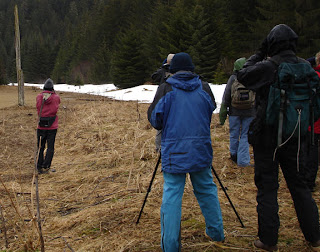 We've been out to Eagle Beach before and knew that you could walk on the other side of the river without having to ford the stream but we weren't quite sure how to get started. This week's bird walk was on the Boy Scout Trail down the southern side of Eagle River – it follows the Herbert River to where it joins the Eagle River. The trail was still snowy and punchy but you could tell that it was a nicely maintained trail with some chipped rock paving the way. It ran through a spruce and hemlock forest and was very beautiful. I'm not exactly sure where the boy scout camp is located – maybe there just camp out on the beach. I might need to have a boy scout tell me. Click here to look for Boy Scout Trail.

This week's birding group was a little smaller probably because the walking was a bit harder. In fact when we got out of the woods to the beach area we spotted another birding group on the other side of the river and some of the others we were with recognized some of them. There were some jokes going back and forth about adding them to our bird list for the day.

A large flock of Sandhill Cranes came through and apparently aren't often seen around here so we stopped for quite a while to watch them circle over and then land. We didn't bring out scope on this trip because we didn't know what the conditions were going to be but those who did have scopes were very generous in letting us look. So we watched the cranes for quite awhile. We had stopped at the edge of a large meadow and also spotted merlin, northern harrior and a Kestrel. At one point a Merlin and a Kestrel were sitting together on the same tree top just waiting for someone to catch them on film. It was a unique opportunity. The Merlin and Kestrel were trying to flush out the Savannah Sparrows and swooped by us several times. And then we were blessed with a flock of Mountain Bluebirds – maybe about 22-22 of them flew through! It was an incredible blue streak flash from one side of the meadow to the other.

In the top picture at one point there were five of them perched on the dead snag with one on the top making it look like a Bluebird Totem Pole! 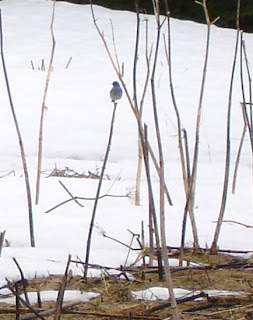 This one took advantage of an empty tripod for a roosting spot. 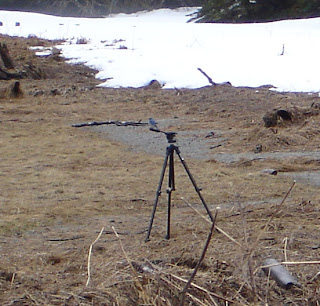 After a few minutes a flock of Robins came by with bright red breasts. Mixed in with the Robin we saw a Red-Winged Blackbird. And then the Pipits came through with a Lapland Longspur hanging out them. Whew!

We walked farther out to the beach and saw a bunch of sea ducks but they were pretty far out and it was hard for us to identify them so we wandered back to the meadow to catch more songbird and raptor activity.
Posted by Heidi Olson at 5:54 PM