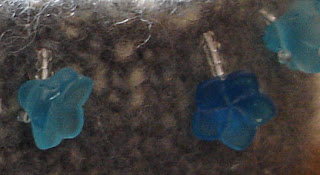 I wanted to make a felted bowl and I couldn't find a pattern I liked right away so I tried to make it up myself. It didn't work out very well at all and I ended up with a hot pad.

I found this pattern and followed it pretty close except I started at the bottom (with the 8 stitches) and worked it up backwards because I wanted to use all of the skein of yarn I purchased to make the bowl as big as possible. I think I increase 1 more time than called for in the pattern to make a little larger bowl in diameter. I wasn't sure I liked the curled up edge but decided to see what happened. 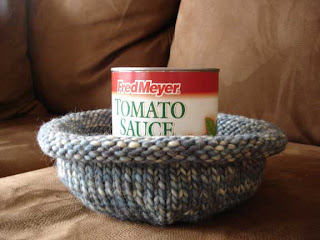 I felted it and it was bigger than I had planned on. I put a small saucepan inside it to help shape it. Tim's mom mentioned that it didn't look as felted as the rug I had done and after thinking about it I remember that I didn't think the water was very hot when I was checking its size. I must have put it on the wrong setting. I made spaghetti sauce* with the can of tomato sauce I used in the above picture but I thought this jar of peanut butter was about the same circumference to use as a size comparison. 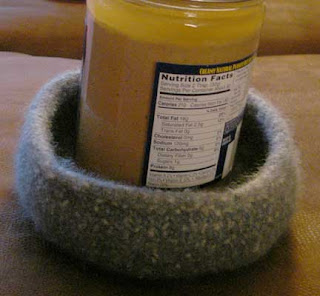 So I decided to throw it in the washer again and pay closer attention to the temperature of the water. I let it got for maybe 20 more minutes and was much happier with the result. Shari and I had been talking about colors and texture and I had mentioned that the bowl looked a little boring and she suggested beads. So I added these beads around the edge. 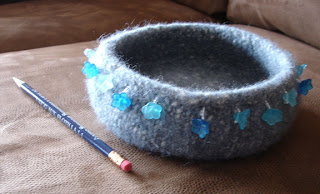 I think it turned out pretty well and I'm glad I took the time to refelt it.


* Mrs Conway's Red Clam Spaghetti Sauce
I wrote down this recipe when I was in about the 7th grade and knew very little about cooking. I've made some adjustments which will be listed after the recipe but I thought I'd give it to you in its originial form.

I usually make half a recipe and only make it with clams (I usually strain off the clam juice) when Tim's out of town. I don't use the butter and use only 2-3 T of the olive oil. I add chopped onion (maybe 1/2 of an medium-sized onion) and saute the onion before adding the garlic. The last time I made it I had a couple links of italian turkey sausage that I browned up (yum) and added about a cup of chopped mushrooms.
Posted by Heidi Olson at 6:24 AM

I hadn't checked your blog for a while and then to my surprise...it is my birthday bowl. Now I have a written history to go along with the bowl for future Antique Road Show! You did a great job and I love it!