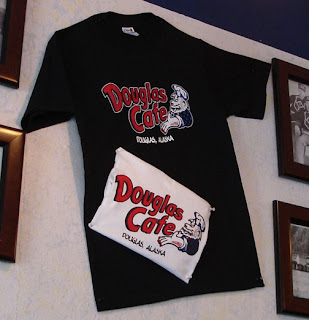 Tim's folks are in town and we decided to try out the Douglas Cafe which is just up the street from the house. We've been told that they had the best burgers in town. It been torture to walk past the place on the way to the library, post office, or newspaper stand during the lunch or dinner hour. The fan over the grill works really well and the mouthwater smell of burning grease wofts through the air.

Tim's mom ordered a cheese burger and onion rings. She thought the meat was a big dry. Tim also ordered a cheese burger with swiss cheese - he liked the idea of the burger being well down and gooped on lots of mustard. I had a patty melt and would have liked a few more grilled onions on it. Tims's dad had a cajun chicken sandwich with onion rings and thought it was pretty good, "Best onions rings" he's had in a while. You could have fries, onion rings, salad, or soup. They had black bean chili or the daily special, spicy sausage soup.

The breakfast menu looked pretty good and they also had several interesting sandwiches and salad combinations. They had about a dozen different burger choices. I think its a keeper and I validate their "Best Burgers."
Posted by Heidi Olson at 6:42 AM