After a nice long walk along Fish Creek to the tidal flats we thought we'd follow the North Douglas Highway out to False Outer Point to see if anyone was catching spring Kings. As we drove by the boat ramp we saw a large barge with a crane on it, a couple of tugs and a couple other support boats. It looked like they were trying to bring something up. We decided to stop and watch for a little while to see what they were bringing up. It doesn't look that far from shore but its 23-27 feet. 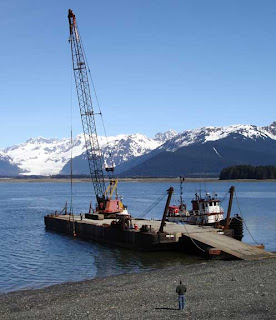 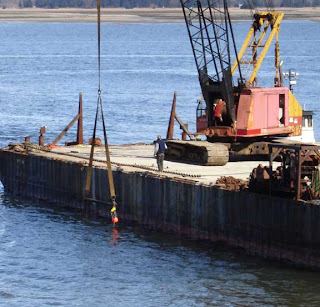 At one point they had the mysterious item off the bottom and decided to add another line. One of the boats had a couple of divers on it and they got in the winter and disappeared for awhile.

and its a…front end loader. We really thought it would be a pleasure boat that had missed the boat launch or wrecked on the beach. 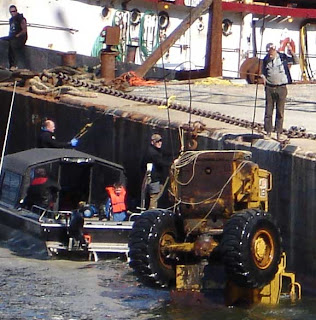 You can see the divers and their boat and Tim's thinking - get out of there fast! The cab was full of water and it must weight a ton! 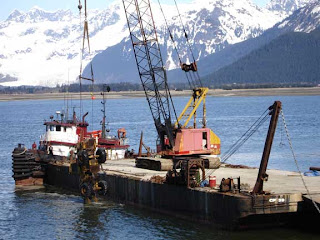 they got it clear of the water and it looked like they were going to walk the crane towards shore. It was starting to swigging around. The one guy on the barge who seemed to be in charge of the operation didn't have a hard hat or life vest and had been hanging over the side this whole time. He began attaching another line to the bucket when… 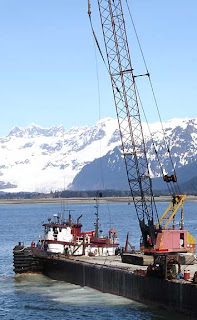 as the realization of what just happened sank in and the steel cables were swinging back and worth… then he ran away. 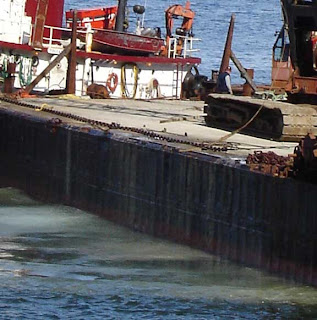 I missed the big splash - we realized that we had been sitting there for an hour. We actually started eating our lunch while we waited. I can't image how all the guys felt. There were going to have to start all over again and probably use the backup cables and belts.
Posted by Heidi Olson at 5:42 PM