I've been following Jill Homer's blog since sometime last winter. I can't remember what I "Googled," I think I was looking for a picture I could use on my blog when I came across her blog and an entry about her taking off on her bike across the Gasteau Channel at low tide from North Douglas to a spot over by the airport in the middle of winter. I was fascinated that she would even attempt a trek across the mud flats, let alone planning it for between the tides! I don’t think she planned to go all the way but at some point she found herself committed by default – she couldn’t turn around so she forged ahead. I started reading other posts and realized that she was adventurous and very brave to attempt riding her bike (or trekking) by herself for long periods of time under "not-so-nice" conditions.

For some reason I found a connection with the words she chose to use in her descriptions. Maybe its because I’ve hiked in a lot of the same places (near the same time) and I found her viewpoint aligned with mine or sometimes complementing my thoughts the difference being based on modes of travel. I guess I also feel a kinship with her on a professional level since she has a background in layout and design. Plus she takes great photos! 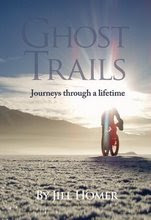 I found out later that she had participated in the Iditarod Trail Adventure (Iditabike) race the previous winter and then I realized that her adventures were helping her train for this crazy-wild race. She recently talked about doing the race for a second time and produced a book through Lulu (self-published) to help raise some money for her endeavor.

I recently finished Ghost Trails: Journeys through a Lifetime and thoroughly enjoyed the adventures that the author took me through. She separates her chapters about the Iditabike race with stories from other adventures giving the reader a narrative explanation of how she got to the point in her life where she considered doing the race.

I think what I like best about her book and her blog entries is that she tells you when she messes up and when she scares herself and how she gets out of it. Its very honest. I really liked comments made by this reviewer on his blog, especially this point:

“The tradition in male adventure literature (which is still a redundant term) is to gloss over the mishap and moments of panic, briefly describe the solution, and move on to other things, thus endorsing the stiff-upper-lip and tacitly reinforcing one's own mental toughness. Jill seems to do the opposite, the terror of the Kuskokwim River waterfall and the Farewell Burn singe a reader's memory.”

I found a few typos in the book and I felt compelled to send her a note so that if she hadn’t found them already and she had the opportunity, she could update her original for future printings. I told her:

"I've really enjoyed reading your book - your descriptions of each day on the trail made me feel like I was right there. I had to grab for a warm blanket several times and I'm sure that I consumed more peanut butter cups then you did through the entire book."

I’m positive that as a young women she isn’t done yet with her journeys through a lifetime–I’m sure she’ll have more to say and experience and just as many readers waiting to share along with her in the comfort of their recliners!
Posted by Heidi Olson at 8:44 PM