Just so you didn't think we were taking pictures of a house that we really aren't living in here are some inside pictures. We've misplaced Tim's camera battery somewhere in the move so there are only a few. Heidi's little pocket camera just doesn't have a wide enough lens. We've already posted a picture of the loft area where my office is and the bedrooms are good sized, but its just too hard to photograph. There are also two bathrooms which…are bathrooms.

So we have a picture of the living room with the back of a tv on the floor: 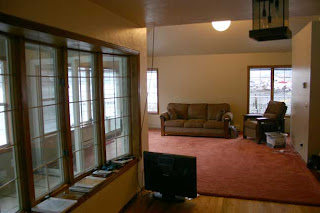 Here's the sliding door to the sunroom and then out to the deck. The sunroom is shared between the two attached homes and the deck goes all the way around the house. 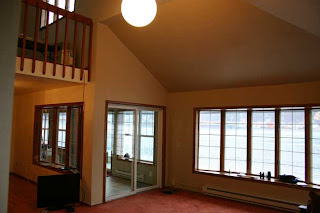 And me sitting at the breakfast bar (waiting for breakfast, Tim) from the kitchen. Luckily the stools were here when we moved in so we had a place to sit. 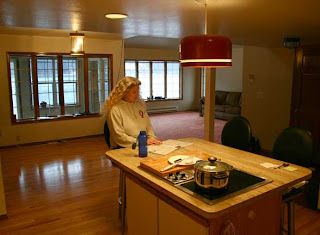 It looks beautiful, Heidi! (Both the model at the breakfast bar and the house.) And a sunroom? How cool is that?!

Did you say "sunroom" that may be a bit optimistic!

Nice, lots of room...bet you can really get going on that giant bouncy ball....ummmm, I mean office chair Heidi