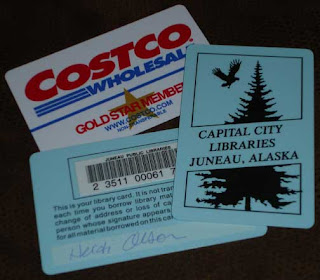 We now have Capital City Library cards so we must be official residents! There's a branch of the library a couple of blocks from here which is really nice. They don't have wireless though! We've walked up there a couple of times and picked out some DVDs. What is really nice is that you can go online and put books on hold and they will delivery them to whichever branch you want and you can pick them up there. That's pretty handy!

The other branches are downtown where the main branch is located. I was in there several years ago and remember it being a really pretty place. They have readings and foreign movies occassionally well as other events. One of these days I might ride to work with Tim and then walk over to this library and check it out. They do have wireless so that might be a good place to work.

There is also another branch in the valley which is in one of the two malls here. Its an interesting location, really, I don't think I've ever seen a library in a shopping mall but its always got people in it. They have wireless and we've stopped in there a couple of times when we were homeless and wireless-less. They should really consider sharing space with a coffee/tea house or with a manicurist or hair saloon but that might get messy. I did notice that is was right by the pet store so at least there's a convenient place to take your shredded old magazines and newspapers (once they've gone to microfiche, of course).

So we hope that Tim's Mom is proud of us getting out cards and we promise not to get any overdue fines. (Yes - they charge $$ here for being late!)
Posted by Heidi Olson at 8:35 AM

I tought my mom would be proud of us for getting our library cards withing a week or two or arriving.
-Tim