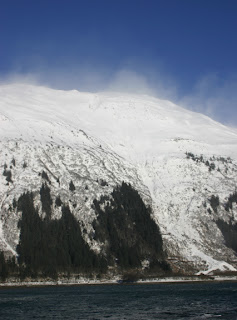 Its windy and comes in gusts. Apparently what we experencing are the Taku Winds and these are pretty mild. We seem to have found the house that's just in the right spot for it . From October through March high east-north-east winds come barreling down the gastineau channel and over the mountains from the Juneau Icefield and have been known to blow up to 100 mph. You can see the recent snow we've had blowing around off the tops of the mountains.

You can see here in this picture that at high tide the waves are crashing up against the house-that's the white railing at the bottom of the picture. When Tim took this picture the storm windows were rattling and the water in the toilet was swishing around. Every once in awhile we hear a rather big "thud" not sure what that is. 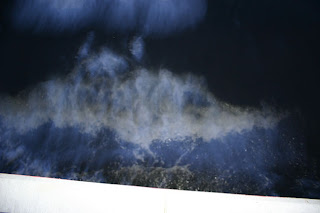 The channel is norally quite smooth but we have whitecaps right how. A little farther down the channel towards the Douglas Bridge it seems to flatten out. 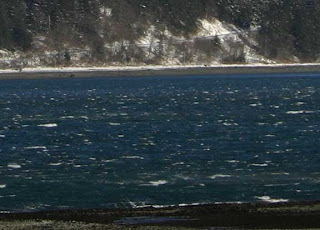 I brought several wind chimes with me from Fairbanks but I don't have the nerve to put them out. I have found a good wing gauge in these flags that are across the street. 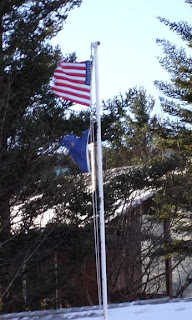 I've been told that this was nothing compared to what it could be so that's something to look forward too, right?
Posted by Heidi Olson at 4:23 PM