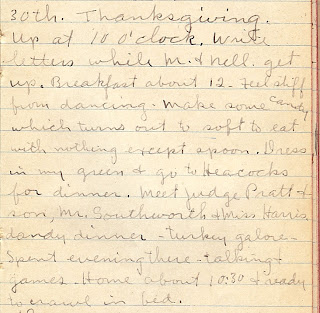 Thanksgiving. Up at 10 o'clock. Write letters while M. and Nell get up. Breakfast at 12. Feel stiff from dancing. Make some candy which turns out too soft to eat with nothing except spoon. Dress in my green and go to Heacocks for dinner. Meet Judge Pratt and son, Mr. Southworth and Miss Harris. Dandy dinner. Turkey galore. Spent evening there talking and games. Home about 10:30 and ready to crawl in bed.


President Howard Taft's Thanksgiving 1911 proclamation November 30th was proclaimed a day of thanksgiving and prayer. Read the New York Times Editoral.
I can only guess that Judge Pratt's son may be Harry E. Pratt who also be came an attorney and Judge for the US District Court and later hired Ted Stevens as US Attorney. Alaska Dispatch.
But the big question...what time do the shops open in the morning? Has Black Friday caught on?
Happy Thanksgiving!