So who would have thought that they actually close the entire highway for a race? We had $20 canadian so thought we use it for gas. We only had 150 miles to go so we didn't top it off (1st mistake). We had some snacks with us and planned to have a nice lunch in Haines (2nd mistake). We got to the highway and saw the road blockades set up with one lane open. The sign said, "Road Closed Saturday 9am to 4pm for Snowmachine Race." ok… it was 8:55am so we still had time, right. We saw another truck up ahead of us so we decided to follow along. What they heck we're in Canada. Were we just going to sit around in the car all day until 4pm waiting. I mean, "come on."

About 45 minutes away, right at Dezadeash Lake we came across 20+ trucks and large enclosed and other types of snogo trailers plus a few misc cars and suvs. It was obvious that the road was closed for some type of road race. Another truck pulled up and a guy and a small girl got out and started to suit up for winter. He told us that the snowgos should be coming from the border in about 1 1/2 hours and then they turn around and go back. At that point everyone follows them along to the finish line. The day had dawned clear and sunny and chilly at least -10 F. We decided to go back to Haines Junction, get gas and snacks and then come back out. We could hang out with the racers and other spectators and then get in line and follow them to the border. So we did. 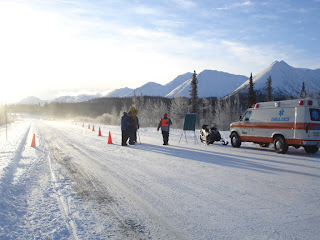 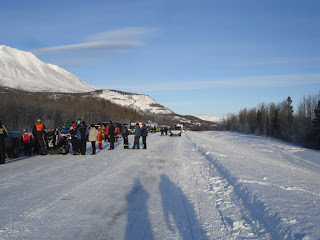 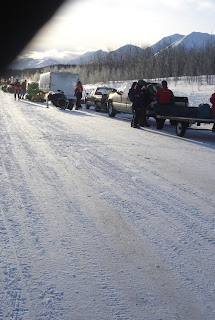 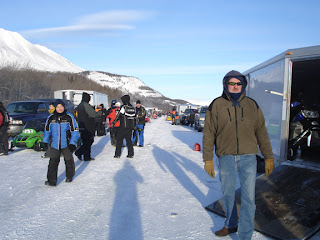 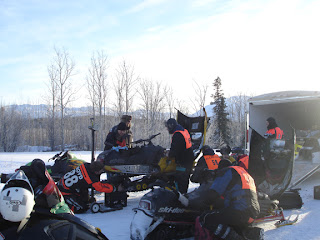 There must have been about 45 racers along with 100s of pit crew people, various officials, and some spectators. We got on our survival gear and walked around for awhile watching them care for their machines. They must have had an hour or so for repairs and to wait for those who had break downs and didn't make it. A semi with a winch and about 6 machines was followed by a small bus (the special bus, I think) and an ambulance. They finally got it together and got lined up to head back to the border. The green flag was waved and away we all went.

We got in link between large trailers and followed the pilot car. It wasn't too bad and we were quickly speeding along. You have to figure that the racing snowgos were going at least 65 mph and you don't expect drivers who hang out with racing snowgoers to be too slow either plus we knew there wasn't going to be any oncoming traffic because the road was closed!

It was a beautiful drive and would have been spectacular if we had been allowed to be on our way as we planned earlier in the day. By the time we got to the pass the clouds had some it and it started to snow. It quickly became a white-out condition. The pass was so immense and so white. We finally got to the race finish and had to wait for several trailers to get loaded up. There's a lot of snow down there and the road was pretty narrow. Not sure why they didn't pick a spot in the road that had a wider pull off. Anyway we got to the US Customs and made our way through.

The road into Haines was pretty narrow, curvy, and snowy. It was a long afternoon in the car. We finally got into town, found the Captain's Choice Motel and had a beer. The motel was very nice, had a good view of the water and close to a couple of restaurants that were open. A lot of the snowgo guys were staying at the same place. Luckily it was pretty quiet and we had a good rest.