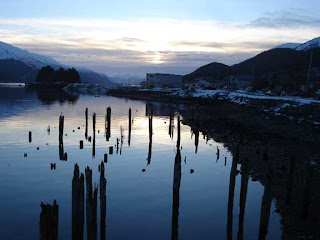 Our first weekend at the new place was pretty spectacular when a beautiful sunrise was welcomed into clear skies. We’ve had quite the show in the water. So far we’ve seen sea lions, Stellar’s Jay, mallards, bufflehead, goldeneye, Barrow’s goldeneye, scaup, harlequin, geese (Canada or Brandt’s – we aren’t sure) horned grebes, raven, crows, gulls, surf scoters, a few eagles, boats, a tug boat pulling a huge barge. We saw a couple of deer on our drive out to Auke Bay where we saw more ducks, grebes, and of course gulls and crows. I forgot to bring the binocs with us so there might have been more birds but it was pretty bright (there is a sun up in the sky). Here’s some more pics from the day’s journey this will take you to flickr and then click on the ho- juneau group.

Our landlord, who lives next door, is smoking salmon so we’ve had quite a bit of eagle activity. In fact, we’ve been hearing a lot banging on top of the house and finally realized that its an eagle landing on the roof peak. Can’t wait to get to my office area in the loft and see the eagles flying straight for the window to land above my head.

On Sunday we went out to Outer Point on Douglas Island. It was just starting to snow when we headed out. We slipped and slided our way down the trail to the Beach. The tide was pretty low so we were able to walk quite a ways. Picked up a couple of clam-shell soap dishes for the guest bathroom (things are expensive here!) When we left the beach the roads were really slick and it had snowed 6-8 inches. We parked in the garage and stayed home for the rest of the day.
Posted by Heidi Olson at 9:36 PM

Surprised to see you wearing a hat and mittens. We thought you were going where it was warmer.

Southeast is pretty, though. Enjoy it.

Wow! SOunds like you really made a good move =) I'm a little jealous!!