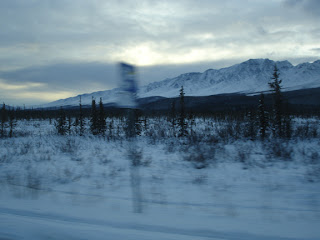 goodbye little trees…we left Fairbanks about 7:30 am on Friday and drove, drove, drove. We made pretty good time because the road really was in pretty good condition. DOT has kept it plowed and the it was also really wide. If we had met anyone on the road there would have been plenty of room for all. We had thought we'd stay at Beaver Creek and am glad we didn't make a reservation because we got there at about 1:30. It would have been a looong night.

Once we passed over the border the road got really rutty with horrible frost heaves, some parts in gravel and some still paved. There were orange flags all over which kept us more aware of the bad spots. We figured that the Canadian DOT must have just put a bunch of flags in the back of a truck and however many flags fell out when going over a bad spot was how many they planted in the snow. I had to watch Tim while he was driving. The speed limit was 100 (kilometers per hour–not mph) .

We were able to get the CBC and spent several hours listening to their news, music and features. It was pretty entertaining. They took every opportunity to make fun of "The States" and a lot of the jokes were true.

Here's Tim at a pull off somewhere in the Yukon. You might notice the moving hat which is an Olson Family tradition. 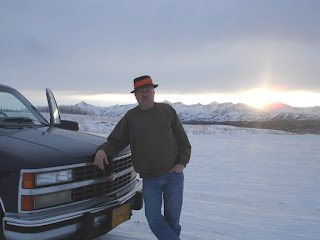 Our second choice for lodging was at Lake Kluane at the Talbot Arms. We got there at about
4 pm (5 pm Canada) which was once again pretty early. It was about -15 F so we didn't think we'd be out walking around and didn't want to just sit around the room waiting for morning and we knew that Haines Junction was only about 1-2 hours away so we kept on going.

Lake Kluane is really big. We'd like to go back there in the summer and check it out - I'm thinking its really pretty. We got into Haines Junction at about 6 which worked out pretty well for us. We stayed at the Alcan Motel Inn which is a pretty new place. We only had a couple of choices and the 2nd choice had a lot of cars at it. We had a really nice, clean room that worked out just great. And it was really quiet. We pretty much spread out and relaxed.
Posted by Heidi Olson at 6:21 PM

I really like the moving hat, though it is a good thing it is only a moving tradition AND that you don't move too often.

I would like to put in a reservation now for the moving hat around August 2008....oh, and if you have any extra fiber tape and yellow legal pads, you can send them along at that time. Please keep hat and other necessary moving items mentioned in safe keeping until then.

Ah, the Talbot Arms Motel. Stayed there several times while going to and fro. And yes, Kluane is a beautiful place in the summer.